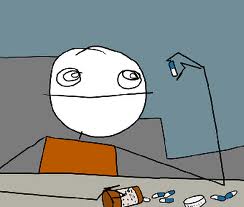 Everything seemed normal and life was moving forward as it was suppose to.  But something big happened that changed my life forever.  I can now say looking back that not getting what I wanted, was a wonderful stroke of good luck.  It took a lot of misery to get there though.

So what happened you wonder…well, it was a weekend in February and I just found out my wife cheated on me.  I cannot begin to explain that feeling that came over me the moment I found out.  I felt so betrayed and hurt, yet at the same time I did not want to believe it.
I was surprised at how quickly the hurt set in and it did not go away.  As reality set in and more and more time passed, I became less interested in many things – work, eating, seeing my friends and seeing my family.  At the time, I did not think I was depressed, just sad and down.  Now keep in mind that for the next six months, she continued to deny that anything happened, yet I would always find suspicious “things”.  I won’t get into details, but the cheating was obvious now that I look back.  She continued to lead me on that she wanted to work at things, while at the same time continuing her relationship with this other guy.  I was the idiot for putting up with it (hindsight is 20/20)!

As time passed during the 6+ months, it was hard to concentrate at work, it was hard to get out of bed in the morning – it was hard to do anything.  I finally went to see someone, and I was put on anti-depressants and an anti-anxiety medication (around June).  I did not enjoy feeling that way at all – everyday I woke up (nights that I slept) I hoped I would feel good that day.  Honestly, I would not wish depression on anyone.  I left my job and took some time off.  I was not fair to my boss – I was so distracted at work, that I was not meeting deadlines.  I was honest with him as to why, and he was very understanding, but I did decide to leave.  The anti-anxiety helped me sleep, and the anti-depressant seemed to help a little – maybe?  The reason I say maybe, is because around November, she moved out.  I think there was a part of me that was afraid to be on my own, but as more and more time passed I felt better and better.  I mean much better.  As quickly as the pain set in, it went away at a good speed too.  By January, I really felt like a new man.  So either the medication was really working, the source of my issues where gone, or a combination of both.  Whatever it was, 9 months later I came full circle, back better than before.

I look back years later and I know I would handle the situation differently, but I also know that depression aside, how I felt was largely a result of me being afraid.  It was something inside me that needed to change in order to overcome this depression.  Medication alone was not the only solution – although it helped get me through.

One thing I worry about now is how will I react if something “bad” happens again.  Will I feel the same way, will I react the same way.  I don’t ever want to feel that way again.  Was I really depressed or was it just the situation?  Am I prone to depression, and if I am, could it be triggered again?  I am always aware of these thoughts and I always make a conscious effort to stay focused on all the good things in my life – I don’t want to focus on the negative things.

The good news is, I lost about 35lbs from this experience and met the most amazing woman.  I would of never met her unless this all happened. My life is happy now.