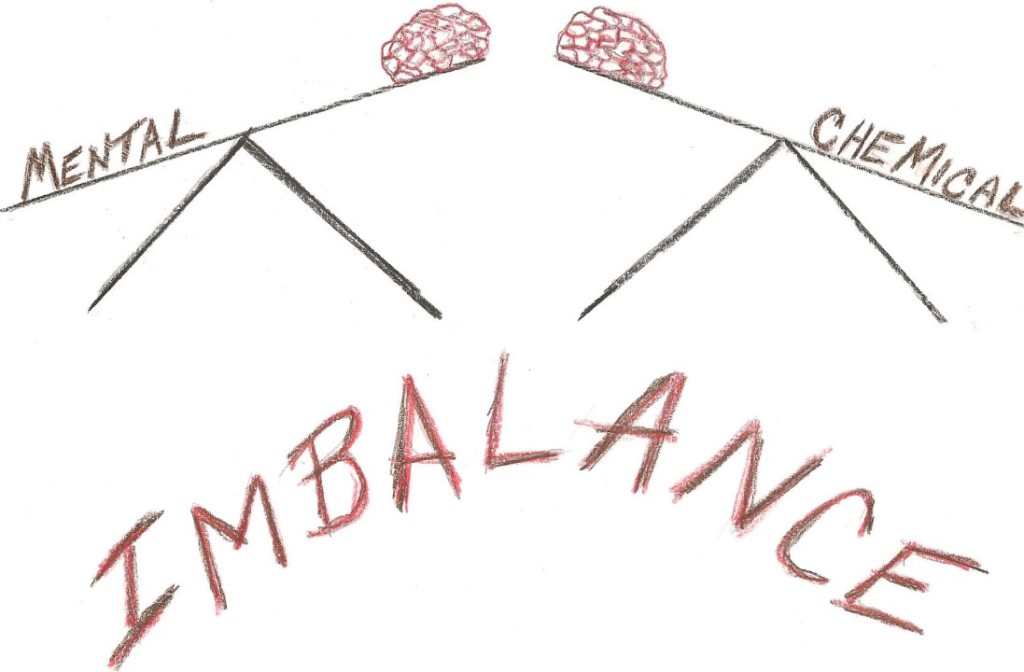 Well chemical imbalance, sounds better than mentally ill, but same thing. It’s been over 15 yrs. now since I have been on medication for the “condition” and it is my balance in my mind.

I struggled though a lot of different situations that I recognize now should have been an early sign of depression.  But years ago I was trying to prove everyone wrong, you know when someone says to you “don’t” or “it just won’t work” I got my back up and won’t listen to anyone, until I literally broke down.

Forty yrs. ago, when my first anxiety attack happened, no one really gave me any kind of  medical answers of why or how to control, it was something I worked through myself and continued to do for years until finally breaking.

To be honest I didn’t really want to tell anyone why I was having problems, again trying to prove everyone wrong. I wanted to be right and strong and just couldn’t tell people the mistakes I made.

My first big one was marrying a man a few years my senior and who told me he was sterile and couldn’t have kids.  Great, I thought, I didn’t want any either. Here was a situation everyone kept saying don’t do, no one liked him, and even just before my Dad walked me down the aisle, he commented “I didn’t have to do this”.  Well don’t ask me how, but a miracle happened and my husband wasn’t sterile and I found myself pregnant. My first official break down was in the Dr.’s office when he told me I was pregnant.  What a shock and then shock turned to hatred. I am over the “hate” now, but it took several years.  I found out years later that my then “ex husband” was also married before and had two other children.  He passed away a few years ago, and with his passing so went my hate for him.  I can now talk with my son (who grew up with his father) without any negative feelings towards him.

I did try one valium way back then, couldn’t function for three days, so I was really not into any kind of “calm me down” pills.

My next big letdown came in forms of death, I lost a very close aunt and had a hate one for her abusive husband that should have died, not her.  Lost a close friend, who had taken his own life, had a hate on for him for awhile, he disappointed me by his suicide, but I can understand now what some depressions do to people.  My grandmother then was dieing with cancer, I felt like I was loosing everyone who meant so much to me.

I had remarried years ago, and thought all was great. I was going through early menopause, having to wear bifocals , was a little depressed about all that, but a personal situation with my husband put me over the edge and the big breakdown, which led to anti depression medication and sleeping aid.

It took a couple of years to get onto the right medication but my “chemical imbalance” was now under control.

I think back to all the signs I had and really am fortunate that I am alive and well now.  I used to drive quite the distance and not remember parts of the trip. My concentration was just not there. I couldn’t read a book, well I could read, but I didn’t absorb anything. I got quiet, which is not normal for me. I wasn’t my own social chatty self. I lost weight; the nerves were just eating it away. I could start things but couldn’t finish any, just lost the ambition.

So an anti depressant worked for a few years, then more situations to handle. My Dad was dying, my Mom was having panic attacks(she was on medication, but I don’t think the right one), I wasn’t handling everything as well I as liked , I was now having more panic attacks and not sleeping. So Dr. prescribed another pill to help me calm down and sleep.

My chemical imbalance was under control again. I have little episodes every once in awhile, sometimes we change the dosage on the meds but all has been going well. I know I will be on these pills for the rest of my life, but I now want to have “the rest of my life” so will continue to try and have my chemical balance!!!!!!!!