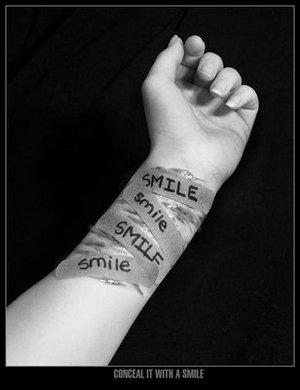 People often ask me when I started self harming and when I reply it was 16 years ago at the age of 13, their next questions to follow are ‘Why?’ or ‘How did you even know about self harming at that age?’

My usual response is to shyly say that I was ‘just going through some bad stuff back then’ and that makes their next questions of ‘Well why do you still do it now?’ or ‘Why haven’t you got help with it sooner?’ much harder to answer. It’s even harder when your family and friends are aware of it and never knowing how they will react. You tend to find if the person you are talking to doesn’t recoil in horror they will instead thank you for being honest but admit they don’t understand it. Some days I don’t even know if I understand it myself; and some days I wonder if I will ever win my personal battle with scarring myself to ease my inner pain.

Let me try and explain my story.

I was 13 years old the first time I cut myself. It was with a cheap disposable razor that only had one blade on it. I stole it out of my Dad’s bathroom cabinet and rushed back to my bedroom. I had never heard the term self harm before and I certainly didn’t know anyone else who had done it. Still to this day I will never know what made the idea go through my head at that time, I do know that I was going through a bad time in my young life, but where the idea came from that I could cut my body and feel better I will never know. I had been the victim of sexual abuse for around five years by a family member and as soon as we moved away from his area I was left feeling extremely confused, ashamed, dirty and violated. I spoke to a lovely woman for several months on an anonymous kids helpline and she helped me to understand that what had happened to me was not my fault and to accept that there was a term for what I had been through – sexual abuse.

My family is pretty small and I knew if I told my parents that not only would I be running the risk that I wasn’t believed, it would also split my family right down the middle. Every day and every night I would have flashbacks about what had happened, I would wake up terrified from nightmares, I would let my parents think I was going to school and as soon as they left for work I’d climb back into bed. All I could think, smell and breathe was the shame I was carrying around with me. So I picked up that cheap disposable razor I had stolen from the bathroom cabinet (and then hidden at the back of my drawer) and all I can remember is closing my eyes and dragging that one singular blade across my skin. It stung like hell and I just couldn’t open my eyes – I didn’t want to see the damage I was inflicting upon my body but with every cut I was feeling less and less shameful as the physical pain seemed to soothe my emotional pain.

I remember opening my eyes and being quite horrified at what I had done to myself. Whilst the cuts were all fairly superficial, my entire arm was covered in hundreds of tiny paper cut like marks. Little droplets of blood were running down my arm and I knew I couldn’t risk running past my parents to the bathroom to clean myself up so instead I just sat and stared at my wounds for hours feeling extremely confused until I heard my parents go to bed. The next morning wow did it sting when I had a shower but I didn’t care. Every time I felt the sensation of physical pain it was another time I had blocked out the emotional pain. My self harming carried on for about six months before I finally broke down and told my parents about the abuse.

Thankfully they believed me and I was sent to see a Child Therapist for about a year and she tried to help me make sense of what had happened to me, but still I didn’t feel I could tell anyone about the self harming. It wasn’t until I was near the end of my year long therapy with her that I confided what I had being doing. I remember her telling me that a lot of teenagers self harmed as a result of various kinds of trauma and I was horrified yet relieved to hear I wasn’t on my own. I tried so hard to stop self harming and between the ages of 15 and 18 I barely done it at all. But I was happy, I had a boyfriend and didn’t want him to think I was some sort of freak (which was the way I saw myself). After the relationship with him ended it didn’t take long for me to pick up a razor blade and start again. The crazy thing about that particular period of self harming was not because I had been ‘dumped’ – we had mutually agreed the relationship was over. Sure I was sad but at the same time I knew splitting up with him was the best thing to do for both of our futures.

At the age of 19 there were so many new types of razor on the market and I would deliberately buy the ones with multiple blades so I could cut more and more areas of my body with every slice I made. I had entered into a new relationship with a new man from a different country and I couldn’t handle the long distance between us, if I knew I wasn’t going to see him for another month then I would cut myself all over my body (still superficially) as I knew the marks would be almost gone before I next saw him. My brain was also playing tricks on me, convincing me that he didn’t love me the way I loved him or we would see each other more than one weekend a month. As it turned out my brain was wrong – he was missing me as much as I missed him and he asked me to move away from my family and friends to live with him. I jumped at the chance and again the self harming stopped. By the age of 19 I still didn’t understand why I self harmed but I could identify that whenever I felt sad or low it somehow made me feel better.