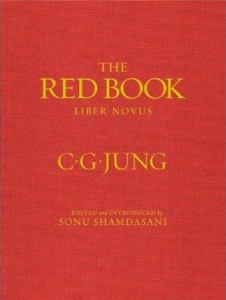 The recently published version of The Red Book by Carl Jung starts out with a quote from him saying:

“The years, of which I have spoken to you, when I pursued the inner images, were the most important time of my life. Everything else is to be derived from this. It began at that time, and the later details hardly matter anymore. My entire life consisted in elaborating what had burst forth from the unconscious and flooded me like an enigmatic stream and threatened to break me. That was the stuff and material for more than only one life. Everything later was merely the outer classification, the scientific elaboration, and the integration into life. But the numinous beginning, which contained everything, was then.”

The Red Book is a gigantic record (it is the biggest, not thickest but biggest, book I own), both in picture and word of what Jung considered an experiment to confront the unconscious. He started this experiment in 1913 and his documentation of it shifts style and tone throughout. It goes from abstract art, to archetypes, to mandalas, to indigenous art. The translation of his words paints a vivid picture and his pictures are rich with symbolism. He utilized a technique that he called “active imagination” to explore his unconscious, inner processes which he recorded. It was not published until 2009, long after his death and by careful examination of what his wishes might be. Only close associates of his family had access to the book itself until 2009, though he had shared parts of it during his life publicly in presentations and also to friends and family in manuscripts. As stated above, it was also where he claims to have derived all of his work and material for his books. He never took the steps to publish it in his life, though he seriously considered it.  I think it is very meaningful that it got published, that it is seen as important to the field of psychology and made public rather than a private journal of a time that must be kept secret. It is safe for us to know this about him. I highly recommend that you check it out if any of this resonates with you. 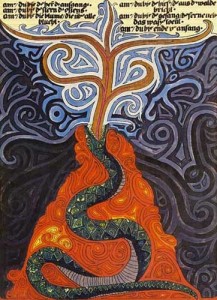 Finding out about The Red Book was a relief for me, as a human, and especially as a psychotherapist. Reading it has been a continued journey.

Only 2 years prior to it’s publication I also had a numinous beginning to my life. And, what “burst forth from the unconscious and flooded me like an enigmatic stream” also “threatened to break me”.

I was studying hypnosis in depth, having my own experiments with the unconscious  (I call it “the subconscious”). I think that my practice of hypnosis is similar to “active imagination”.  I had strikingly powerful moments beyond anything explicable and very subtle moments of how easy it is to hear my self. I became acutely aware that so much of the world that I had constructed or that had been constructed for me did not support me. It was actually counter to this nature of my self that I was discovering. It did not fit. I had been forcing myself into a box unknowingly. No one had taught me about my sensations, desires, subconscious, and self that simply ARE. I became aware that there was an essential non-constructed me that went beyond logic. And, having this awareness, I could no longer continue to live in it in the same way even if I had wanted to.

Similar to Jung, I had grown up in a religious environment. And, I had so many thoughts and questions about how to live, knowing that I will die.  I understood that there was something underneath all of this physical world, and that actually what took place in the physical world was a result of something much more subtle, something much more essential. Religion was not taking it deep enough for me. My study of systems and psychology had not gone deep enough. They were talking about patterns of behavior…but what about what’s under that?

I did not know what to hold on to. So, I let go. I let myself be free from the things I had used to hold me up until that point: my family, my religion, my home, my familiarity, my isolation, my job, my analysis, my knowing, my controlling.

I did not know what would come of it. I only knew that there was nothing else for me but the darkness. So, I entered the darkness.

And, I knew that no one else could understand what I had been through, even if they wanted to. And how do I even talk about the abstractions I am experiencing? New and different physical sensations, images, visions, vivid dreams, metaphors…I did not even know how to talk about this with anyone.

Judgmental thoughts would come to me: “How can you ever be a therapist and be in this space of depression and not knowing what you’re doing with your life?” And, I let them be and let them pass without knowing. In the past, I would have agonized over those thoughts. I would have assumed they were true and that I was doomed to be a fraud always and forever. I had always been such a logical person on the outside.

But, because I had to, I stayed in a space of not knowing with them. My ability to “know” had been broken open.  So, though at times, I craved an answer to these judgments…I found that I did not have one. I was therefore forced to let it go.

Through experimentation with life, with my value, with my vulnerability, I feel that I am ever evolving into spaces that feel progressively more and more fitting for me. I have roots now. I have a tribe. I have space to grow, expand, and be nourished. I now feel at home with not knowing, rather than feeling lost. I guide my clients in this practice. I work with clients who are genetically highly sensitive, like me, to trust what they sense. To use what they sense. It’s all feedback, and it all IS.

The validation that I got from Carl Jung having delved so intentionally into exploration of the unknown aspects of himself, and as he says being “menaced by a psychosis”, and then thoroughly documenting it allowed me more room to be fully human. Which, I think, allows me more room to be a truly effective therapist. I get to bring my tenderness and vulnerability to the connection between client and I, rather than bringing my knowing…which really only gets us so far. I get to bring my questioning. Like Carl, I too get all that I share in my work from my showing up with the unknown and utilizing it in the known world.

I recently wrote a post for HighlySensitive.org about the analogy in the psychology field that creative geniuses and those who experience mental illness are in the same water. The difference is that one is swimming and the other is drowning. If you are living in the water, you either act with it or get acted upon. This is important.

I was also recently reminded of this article about the science of success which asserts:

“Most of us have genes that make us as hardy as dandelions: able to take root and survive almost anywhere. A few of us, however, are more like the orchid: fragile and fickle, but capable of blooming spectacularly if given greenhouse care. So holds a provocative new theory of genetics, which asserts that the very genes that give us the most trouble as a species, causing behaviors that are self-destructive and antisocial, also underlie humankind’s phenomenal adaptability and evolutionary success.”

This information turns many ideas about mental illness and mental health on their heads.  The fact that a prominent psychologist who helped shape much of the practice of psychology (including being the first to talk about innate sensitiveness), would intentionally embark on this experience of psychosis reframed my understanding of psychosis entirely.  It is not a permanent state. It is perhaps even valuable, and further more a natural state of being that all human beings can experience. It is a natural state that many DO experience because of their context and individual factors, such as genes.

I am so impressed by the British Psychological Society’s very recent response to DSM-V proposed categories. The DSM is the Diagnostic and Statistical Manual that categorizes all mental disorder diagnoses. The Society expresses concerns that we are being negatively affected by medicalisation of normal responses. They recommend that mental distress be seen on a spectrum, and take unique individual factors into account. YES! Please check it out and send in your own feedback to the APA:

All parts of our selves are important and exist for a reason. I intentionally give space to all parts with my clients and I am time and again amazed at the resilience, satisfaction, and progression that can happen when all parts of us are allowed to speak…even the “psychotic” parts.  Art is so valuable in this way; it lets us express what is beyond words and logic without analyzing it.

I suggest to you now that you give your self a psychotic break today. Let your self take some time from making sense and just listen to your sensations, listen to your body, feel the sensations, feel what it wants, see the images, move your body, write, draw, paint, imagine…satisfy your essential self. Let your logical self be a faithful servant in this. Meet your self where you are and know that you can go anywhere you want to go from here. Reach in and reach out. Flow and open and be supported in your truth. If you come to a space of not knowing, just be in it. You can be with it without being overcome by it. You are powerful and so you can interact with what is, but only once you are really with what is without letting your self get lost in it. It is important to keep a balance with logic, to let logic and the illogical (as well as what is in between) be utilized together.

To sum up, I want to share this piece of a letter written by Jung in 1918 to another psychologist that is included in The Red Book:

“The work on the unconscious has to happen first and foremost for us ourselves. Our patients profit from it indirectly. The danger consists in the prophet’s delusion which often is the result of dealing with the unconscious. It is the devil who says: Disdain all reason and science, mankind’s highest powers. That is never appropriate even though we are forced to acknowledge [the existence of] the irrational.”

A phrase from the song “Hallelujah” has been sticking with me lately: “Love is not a victory march. It’s a cold, and it’s a broken hallelujah.”

I sigh a cold and broken “hallelujah” as I sit here considering all this now. It is tricky to be faced always with the irrational and live in a rational world. There was nothing grand, ultimate, final, or peak about my experience. I am grateful to be where I am, broken open…but it certainly is not a path that I ever could predict or recommend. I honor each of you that walk this path as well, as cold and broken sensitive warriors making your way in the world that we are in. Whatever place you are in now, whether it be as victim, survivor, or thriver, I honor you where you are and call you on as a fellow. Let’s all shine our light for each other. 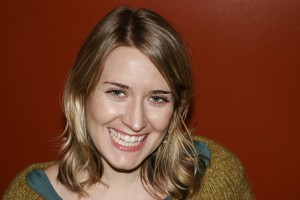 To learn more about Ane and her services, visit her web site sensitiveleadership.com