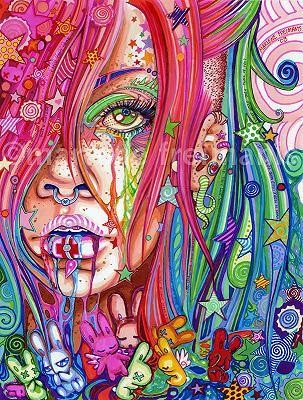 This post is a continuation from My Bipolar Journey… So Far (Part I).

Combined with the severe and long lasting depressive episodes that I also experienced (much more often than the ‘highs’) my psychiatrist explained there was a mental illness called Bipolar Affective Disorder and it sounded like I had experienced at least two manic episodes and at that point was still a bit hypomanic although he could see I was getting to the point of crashing down. It was only when I came crashing down completely that I realized the full extent of the consequences of all my actions during this most recent manic episode. I was in a real financial mess, had lost my job due to poor attendance, had a flat full of baby stuff and clothes which didn’t fit me. Thankfully I managed to return a lot of the items but the money spent on gambling and partying still left a fair bit of debt. It has taken me until now to pay off my original loan and I have also managed to clear one credit card but still have another which is maxed out. I am unemployed and rely on state benefits. When you come crashing down from a manic episode your mood state is very unpredictable.

Some people can manage to have a period of stability but for me I sunk into an awful depression where I felt ashamed, guilty, embarrassed and scared because of my behaviours whilst manic. I began to isolate myself from friends and family, I hid indoors and only left the house for appointments. I felt like I didn’t know how to behave around people and I was scared about what they might be thinking about me. I began self harming regularly during that depressive episode and constantly battled against the thoughts that I was crazy and shouldn’t be here. It was a very dark place to be.

Slowly I began to accept my diagnosis and started reading everything I could about it. I read articles and auto-biographies of people who also suffered from Bipolar. I went onto support forums online and gained insight into what this condition was all about. I found the ability to tick off the boxes and admit to myself that yes, I did meet the criteria for Bipolar Disorder. I also learned that periods of psychosis can be common alongside the highs and lows; and the belief I’d had that my baby was still here was a psychotic symptom. A few months after my diagnosis I decided I wanted to try medication and tried Depakote (Sodium Valproate) which I couldn’t tolerate, then we tried Gabapentin (not a typical first line treatment but one I was keen to try as it had a fairly low side effect profile) but Gabapentin made me extremely anxious. It was third time lucky for me when I started on Lamotrigine and whilst it seemed to take forever to titrate the dose up I had no side effects from it at all. I have been on it over a year now and not had one manic episode since.

I sort of miss those high feelings but have also learned that when I am manic I feel on top of the world and therefore will not seek any help as I can’t see that there is anything wrong with me. You lose insight when you are manic and because you are less likely to think there is anything wrong, then the manic episode will most likely carry on until you are completely burnt out and have a list of devastating consequences left behind to deal with. For me I was still having occasional psychotic beliefs so we added Seroquel (Quetiapine) into my drug cocktail, this is also supposed to help the Bipolar Depression. I have only been on it for around six months and whilst it has taken away the psychotic episodes it hasn’t helped that much with the depressions. It’s all trial and error with medications and in my experience you tend to learn pretty quickly what is going to work for you and what isn’t. I also take an anti-depressant but I’m not convinced it does much good with bipolar depression.

The most important thing I have learned since my diagnosis is that bipolar is not me. I am a normal person who happens to have a mental health condition. It has taken me to some really bad places where I have been detained and hospitalized; and it has taken me into almost magical worlds when I have been high. I have learned that talking therapies are just as effective as medication (if not more effective) and it is the combination of the two which help you to learn about your condition and learn how to identify when your moods are changing.

Being given a diagnosis and being told it is likely to be life long can be a confusing time, but once you have a good support team around you and can talk openly about your Bipolar Disorder that is when you may just find that people can be much more understanding than we ever thought possible. Some people can be really lucky and find a medication cocktail which works brilliantly for them and enables them to live a normal life, feel stable and able to hold down a good job. I’m only two years into my ‘official’ Bipolar journey and still fluctuate between stability and depression but I’m getting there slowly, one day at a time. And sometimes when you are especially low all you can do is live minute by minute, hour by hour, day by day. Sometimes it feels like one step forward and two steps back but that’s the reality of many mental health conditions as well as many other health conditions. On the flip side learning about Bipolar Disorder can be fascinating and educating yourself about it is so important, as is educating those close to you.

I hope this post might help others to know that they are not alone and if you can find someone you are comfortable talking about your Bipolar Disorder with, then you are even less alone. There is help out there and people who do understand how this condition can affect every area of your life. But I want to end on a positive note so I will repeat again: Bipolar is NOT you – you are a wonderful human being who just so happens to have a condition that might mean you need a little extra support in your life. But this is your life. So try to enjoy the good days and be gentle to yourself in the bad days and always always remember that you are not alone.

You can find out more about MyCrazyBipolarLife on her blog.