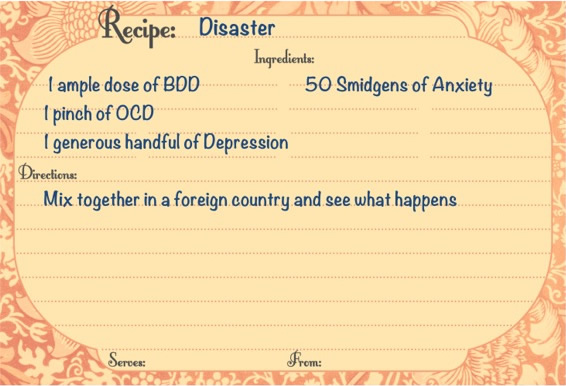 The months leading up to September were tricky at best. In fact, they were really quite awful. Getting out of bed, getting dressed, and doing any act of basic hygiene was out of the question. It was the first time since March that I’d seriously considered ending it all. The appeal was simple; silence. I just wanted some peace and quiet. I guess the trigger for this period of feeling like I was at rock bottom was induced by the fact that I was preparing to move abroad for a year, in order to study at a French university as a compulsory part of my degree in French and European Politics. It was touch and go for a while as my GP was reluctant to let me go. My university were well aware of my problems, and so a letter of consent stating my fitness was necessary. That was a stressful time, waiting for my sanity to be assessed. I didn’t want to stay in England for a year whilst all my friends and boyfriend were off gallivanting around the globe, but at the same time I was very conscious of how unstable I was, and considering I hadn’t attended university for a year due to crippling anxiety, I was concerned as to how I would fare in a foreign country.

After a drastic increase of my antidepressant medication, an influx of serotonin lifted my mood and I began to feel better, and even excited at the prospect of living in the south of France for a year. I decided to approach this year not as an integral part of my academic success, but more of a transition period from being an agoraphobic bed dweller to actually being a functioning human being. It’s a bit like rehab, only with more mosquitos and a sea breeze. Something that I started doing once I arrived in Montpellier was blogging. I found that writing about my thoughts, feelings and past experiences was extraordinarily therapeutic, and it also gave me some comfort that other people who are going through the same thing would read my writing and not feel alone. It is also a great opportunity for me to indulge in my obsession with cats, so that’s a bonus.

Writing my blog has really helped me decipher the deterioration of my sanity, and understand what went wrong and when, and why I am the way I am today. I have been lucky enough to encounter not just one, but three different mental illnesses which all combine to create my floofy little brain. When I was around 9 or 10 years old I developed Body Dysmorphic Disorder. Obviously I was oblivious at the time, but due to some cruel bullying, along with the fact that I had always been different because of my tallness and early development, meant that I had always been overly conscious about my appearance and the way that I was perceived, which incurred some Obsessive Compulsive Disorder-type ritualistic behaviours. If I had to express BDD in one short sentence, I would say it was a heightened awareness of one’s physical appearance, of the volume of space they inhabit, and of the way that other people think of them. I guess an overwhelming sense of not being good enough would explain it quite well too. Doctors and other professionals would disagree and say that it is when the patient perceives a distorted image of themselves, but I’m not ready to believe that yet, and I probably won’t be anytime soon.

I am very much aware that BDD is a lesser known mental illness. A lot of teenagers and young adults become self-conscious due to the way that the media portrays an image of perfection that we all must adhere to. At first, that’s what I thought I was a victim of, but in fact it was so much more. Whilst being aware that my illness can be interpreted as a girl who is narcissistic and vain, the pain and constant discomfort I feel in my own body reminds me that this is not normal, that this is not an acceptable way to live and that it is okay for me to be honest with myself and admit that I suffer with a condition. Sometimes I feel like the real person I am supposed to be is inside this cage that is my body, scratching and screaming to get out so that I can live the life I am meant to without my looks holding me back.

If I could live a normal life and still function regardless of this one aspect of me, it would be a bit better than the situation I am currently in. I could avoid mirrors and reflective surfaces, I could even handle the dread I feel when I am tagged in a photo on Facebook. I could save all my behaviours for when I was in private, I could even put time aside each day for when I get trapped in front of the mirror, where I physically feel as though I cannot leave without picking and poking all my blemishes, as time consuming as it may be. But as I said, BDD has OCD like tendencies, so anyone who has suffered with OCD or knows of someone who has is aware of the crippling anxiety that comes with it. I feel like anxiety is a bit underrated as a mental illness. People hear the word anxiety and think “Oh, you’re a worrier are you? Bless your little heart…”, when in fact there is so much more to it. The physical sickness that worrying can incur, the over-dramatization of any given situation and the constant risk of a panic attack are nothing short of a nightmare. The sweating, the blushing, the headaches, the dizziness, the shaking, the chest pains, the list really could go on. When you feel this way, it is hard to do anything at all. The easiest way to prevent all these things from happening is to stay in bed and marinate in your own fear and filth…

Enter depression, the third of my trilogy of delightful diseases. After the manic episodes of anxiety, the fall down to the black hole that is depression hits you like a tonne of bricks. Depression really hits me hard. There is such a difference between being depressed as an emotion, after a break up with someone or receive some upsetting news etc…, and then there’s Depression the illness, which consumes you until you feel nothing more than an empty vessel, a shell of your former self. Depression sucks the life out of you. When depression hits me I’m in not much more than a catatonic state. I’m a zombie and I lose all desire to be clean, to eat, to drink, to think, to do anything in fact. My capabilities are limited to staying in bed all day and reluctantly dragging myself to the toilet, but only if absolutely necessary.

As you can imagine, fluctuating in between these three different states of mind can be draining and exhausting. Anytime I feel the slightest bit of energy I grab it with both hands. This of course means that functioning as a normal human being is an art I have lost touch with. So I take baby steps. If I wake up and feel that the only thing I can manage to do is take a shower, I’ll take that and that is something for me to be proud of. If I get up, have a shower, get dressed and go outside then wow, I deserve a medal quite frankly, even if it takes me ten costume changes, five touch ups of make-up and three different hairstyles before I can leave the house, then so be it.

I really can’t stress enough how valuable having a strong support network is. Although the stigma attached to mental illness is still present today, I think you’d be surprised as to how many people are so open-minded, non-judgemental and understanding. It really makes the world of difference when you let people know what you’re going through. For example, after living with my housemates in France for about a month I started to gradually open up about what I have been/am going through. They reacted in such an amazing way, asking how I am on a daily basis, making jokes with me about it when I am able to, and even leaving adorable messages on my bed whenever I do something quite underwhelming, but which obviously took a lot of effort for me (i.e. go to university, in a foreign country, when I hadn’t attended my own British university for a year). I can’t even begin to convey how much I appreciate and value my biggest supporter, my boyfriend. His constant words of reassurance and encouragement are what keep me going. Considering I once thought I was too hideous and disgusting to ever be in a loving relationship, he is gradually helping me to love myself as well as him. I could sing his praises until the cows come home, but I shan’t swoon too much.

8. A sprinkle of Sun, Sea and Sertraline

Don’t get me wrong, I am in no way cured. The way I explain it now is that it’s more like a bad smell that I can’t really get rid of, but I can control it and take preventative measures so that it does not consume me as it has done before. For example, here in Montpellier I see an English psychotherapist, so that I always have someone of a professional nature to speak to, and receive advice when I may have a dip. I hope I’m on the road to recovery, I really do. I mean it has been 10 years and I’ve just about had enough. I’m bored to be quite honest. The setting that I am in really does help. Montpellier is beautiful, and I feel so lucky to be able to call it my home for a year. My boyfriend is just down the coast in Italy for his year abroad, so we manage to see each other every couple of weeks and travel around the Mediterranean together. It sounds like the dream, and I’m aware that people will be jealous and think that I’m incredibly ungrateful. Let’s just say, if I wasn’t here I’d be a lot worse! Being here, speaking French, and soaking in the laid-back and quaint European lifestyle are just what I needed, along with 200mg Sertraline. I’m not suicidal, and that’s the main thing.

9. Finish with a dash of Advice.

So, my parting pearls of wisdom, regardless if you suffer from all, one or none of the mental illnesses I experience is to always feel as though you are able to talk to at least one person you know. Whether that be someone close to you who can stomach all of the nitty-gritty details, or just an acquaintance who will offer you a brew and have a conversation that will cheer you up. 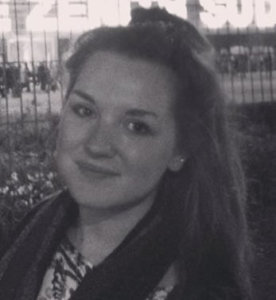 Hannah is a 20 year old student from Manchester, England and is currently spending a year abroad in Montpellier, France as part of her degree in French and European Politics. This year, Hannah has taken to blogging about her experiences with mental illness to not only reap the therapeutic benefits, but also to raise awareness and hopefully help other people who have been struggling too.