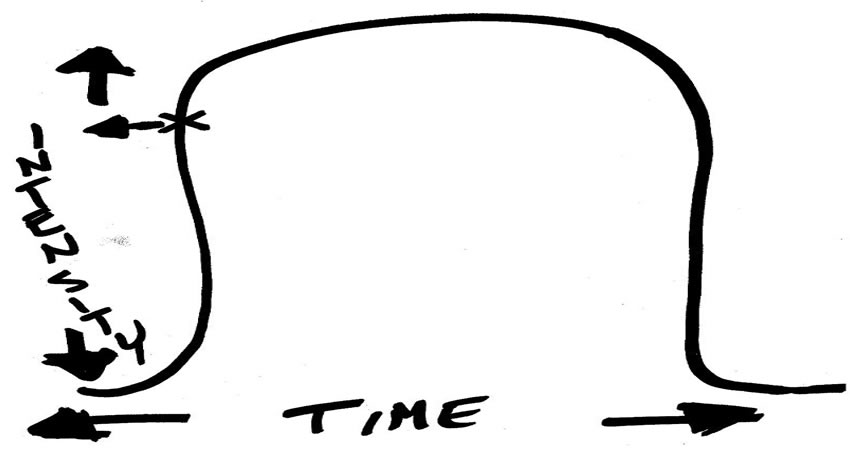 Many people with BPD use anger as a tool to cope with what they judge to be a negative feeling. For me, I was always unable to see that what fuelled the feeling was actually “hurt” feelings. I transformed the feelings into anger because it scared people away. It kept me “safe” from being hurt by that person again. It was my way of “discharging” feelings that were so strong that I could not contain them. Because I grew up in a household where no one knew how to handle anger, I internalized this behaviour and that is how it manifested in my BPD self.

This is a common experience for many people with BPD and it explains why so many of us “lash out” in such a destructive fashion. Most of us with BPD often cannot even identify the feelings we are having and that causes frustration and so we lash out at others as a way to cope. For me, this coping mechanism, even though it was highly destructive, became my go-to behaviour. My experience was always like this. The feelings were simply too large, too intense and I could not contain them within myself so I put them out into the world in the hope that another person would be able to “handle” them. My therapist used to refer to this as the “affect ball game”. Sort of like a game of “emotional hot potato”.

One of the most profound discussions I ever had with my DBT therapist had to do with my intense anger. My anger was always an almost knee-jerk response to any kind of slight, however small or insignificant. She asked me, “Do you think you might be reacting to feeling hurt instead and that you turn it into anger because that is an emotion you learned how to express from your father?” I did not really know what to say.

So we talked about where emotions come from. This was something I knew and understood — that emotions are generated in a very old and primitive part of the brain called the amygdala. She explained that there are 6 basic emotions. These are as follows: 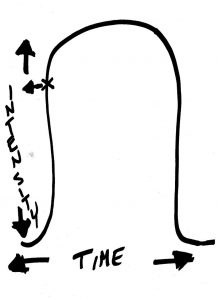 And she then asked me if there was any possibility that I was channeling my hurt feelings into anger because that was the model I had grown up with as a child. She drew the diagram pictured here and she explained that emotions don’t last forever. That is one of the reasons why we are taught distress tolerance in DBT — to give ourselves time to let the feelings dissipate on their own. But she said that when we don’t give them enough time to do that we will often “jump off” (see arrow in diagram). She said that the jumping off can be into anger or self-harming behavior, or even something like gambling or on-line shopping. It is a way to “discharge” the feeling because we can not tolerate its intensity.

This really resonated with me and I spent most of the next week thinking about it. I had been talking to her about the way my father used to get so angry at me and lash out, and actually physically hit me, and how I felt every time it happened: stunned (because I quite often didn’t see it coming, it felt like it came out of nowhere), helpless because I couldn’t defend myself and my mother never intervened to stop it from occurring in the first place, and hopeless because I was too small and powerless in the face of his fury to defend myself.

She then asked me, “What does hurt need?” Again, I didn’t know what to say. “Justice,” was the only answer I could utter. “What about comfort? She asked me.
“Oh, comfort”, I replied. I have very little compassion for myself but TONS of it for others.

So, she challenged me to stay with those feelings of hurt and find a way to “talk” to the little girl inside of me and offer her words of comfort. She even gave me a few phrases I could use such as, “You were just a little girl and didn’t deserve to be hit by him” or “Of course it hurt you when he hit you. Here is a soft hug to wrap yourself in.”

I spent some time that week trying to do that for my inner child. I recalled the seminal work by John Bradshaw in the early 1990s on how to heal your inner child. At first it was extremely difficult to have this inner dialogue with my younger self but the more I practiced it, the easier it got. I found that by the end of the week, I had learned the language needed to soothe her and I felt a big shift in my anger as it began to decrease.

This is part of the DBT module called “Emotion Regulation”. I needed this lesson perhaps more than any of the others I had in any of my previous my DBT classes. This conversation was particularly important in terms of helping me come to terms with the recent breakup with my partner of almost four years. I had been experiencing utter rage towards him. Learning this and putting it into practice helped me move on into being able to really practice Radical Acceptance, something I had been attempting to do and which I thought I was doing successfully. I would be okay for a little while until I would have another memory and then I would “jump off” into rageful vengeance again and be right back at square one. Learning how to sit with my hurt and wounded child and comfort her instead of railing at the world in impotent rage helped me enormously and helped me finally be able to move past the breakup of my relationship.