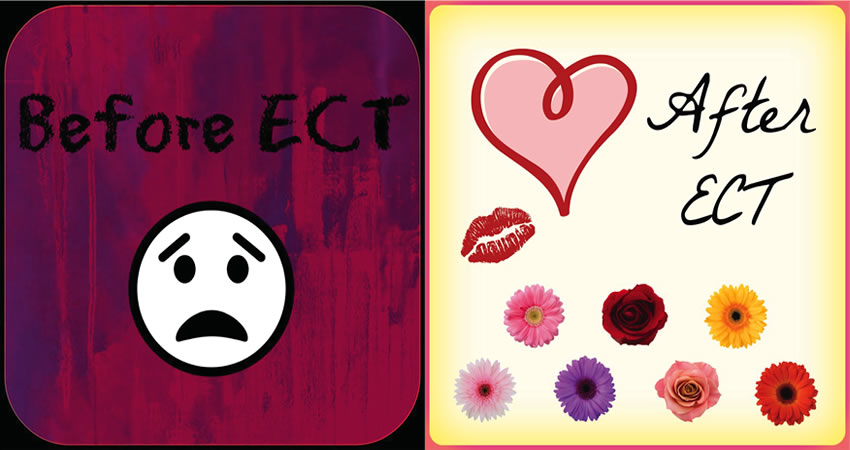 Yes, that’s right. Electroconvulsive therapy or ECT is now my family’s first choice for treating psychotic episodes and I’m giving you 5 great reasons why. First I need to give some background to our situation so you understand where I am coming from.

My wife Pauline has been diagnosed with schizoaffective disorder. When she is well she is very well. She functions at a very high level as a wife and mother and manages all that goes with being the CEO of everything that is great in our home.

However when her schizoaffective illness decides to rear its ugly head, it does so with a vengeance. It hits hard and it hits fast! She will go from having no issues or problems of any kind, to being in a psychosis 90% of the time in 48 hours.

My wife’s illness manifests itself as misinterpreting virtually everything that is said by everyone. Of course the misinterpretations are not positive. For example I might say “Good morning, did you have a good sleep?” Her reaction would be “What do you mean–you hate me and wish I was dead and didn’t wake up!” When this happens, all day, with every conversation, it is extremely stressful for not just her but everyone around her including our daughter.

The illness causes constant and severe mood swings ranging from laughing like a little girl about nothing, through periods of intense crying, then into moments of euphoria about simple everyday things. The euphoric moments change in an instant to periods of intense hatred and distrust caused by the paranoid thought that everyone is out to harm or kill her.

When the illness is operating at it’s worse, my wife is simply unable to cope with her immediate family let alone with others in the community. Sadly this is when the battle to get her into hospital for treatment begins. This alone is worth writing about in detail and I would like to cover in a follow up story.

Her illness is incredibly resistant to medication. When she’s well, she needs very little medication to stay well, but once the schizoaffective disorder is out of the bag and running loose there isn’t enough medication in the world to tame it.

The Impact of ECT for Us

Before we tried electroconvulsive therapy, her average hospital stay, with 5 separate admissions over 12 years, was 14 weeks. Even after 14 weeks of very high doses of anti-psychotic medication she would only be just OK and required very careful management.

This all changed when, in desperation, her treating psychiatrist recommended ECT. Since using ECT for her treatment, on her 3 subsequent admissions she has been able to be discharged in a dramatically improved mental state (far better than after 14 weeks of medication only treatment) in about 1 week compared to the 14 weeks previously. A massive improvement in anyone’s book I’m sure.

What Does ECT Involve?

A little detail on what having electroconvulsive treatment actually involves. I have been with my wife several times during the procedure.  I am speaking from my own experience.

The administration of ECT has changed quite a bit even in the 11 years we have been involved.  ECT is administered to a patient who is placed under a general anesthetic, all the normal checks are done first such as general health, blood pressure, pulse, check the lungs for any breathing issues etc. Once the all clear is given the general anesthetic is administered putting the patient to sleep. A tongue guard is then inserted into the mouth and the ECT machine connected. While this is going on, a muscle relaxant is also administered which stops the visual or external appearance of any “convulsion”. This wasn’t the case 11 years ago, and it was like watching someone have an epileptic fit. Now, the only visible signs are slight twitching of the fingers and toes.

The ECT dose is administered via electrodes placed on the forehead and temple areas (exact location varies on what is being treated). I’m not sure of the exact length of the administration of the ECT but it is very short, very quick. It is over in less than a second. The doctor will then watch and wait for the fit to start. The muscle relaxant stops the external signs of the fit but it does still happen, and is monitored via sensors placed on the patient. It has been explained to me that the slower and longer the fit goes the more effective the treatment is.

Following treatment my wife is wheeled into a recovery area. Fifteen minutes later she is sitting up and ready for a cup of coffee. From being taken into the treatment room to enjoying a cup of coffee is 30 to 40 minutes maximum.

So why is ECT our first choice for treatment?

My wife’s schizoaffective disorder is extremely resistant to medication. The first time she had ECT she had been in a mental health ward in a deep and strong psychosis for 14 weeks with zero signs of improvement despite being given what her Doctor described as enough medication to “treat an elephant.”

We hadn’t been able to hold a civil conversation for all this time. After the first dose of ECT she called me and said “Hi darl! I’m back in the ward from having the ECT and feeling great except for a bit of a headache.”

You cannot believe the relief I felt! Tears streamed down my face. My wife is back! Things will get back to normal.

2.  ECT has an immediate impact

In our experience medication works slowly. You have to take the medication for a period of time and work up the level in your system until you get to a therapeutic level.

ECT on the other hand has an instant effect.

3.  ECT can be done as day surgery or as an outpatient

One of the great things about ECT is that you can go into the hospital early in the morning for your treatment and be home by lunchtime.

As a result, having a course of ECT is far less of an inconvenience to everyone concerned compared to lengthy hospital stays waiting for medication to reach the right levels and hoping it stabilizes the symptoms.

4.  ECT “blurs” or weakens memories of things said and done when in a psychosis

One of the biggest detractor’s of ECT for many people is the perception that it erases or blanks out big chunks of memories.

I can say with a great deal of confidence that our experience is different. Yes, there are issues with memory following ECT but my wife and I have found that for her, the memories aren’t gone, they are just a bit messed up.

Imagine if all your memories are like files in a filing cabinet. All in a neat logical order so you can easily and quickly find what you want. We think ECT just mixes up the order and the indexing.

With a bit of time, some training and a lot of effort we have found 99% of everything is still there, even if it is a bit messed up in the order.

So why is this a good thing? I’ll explain. In my experience one of the cruelest things about a mental illness is what it does to someone’s self-confidence, their self-esteem, their pride.

Put yourself in these shoes – you abuse and accuse people you love and people who stand by you no matter if you are well or unwell. Would you really want to remember every nasty comment or accusation, every argument, every paranoid thought? Probably not…

This is one time when the effects of ECT of memory are surely a good thing.

I’m sure most of you will know that schizoaffective disorder is (in a simple layman’s explanation) schizophrenia and bipolar rolled into one. This combination is one of the reasons that the illness can be so difficult to medicate. The treating team have to get the anti-psychotic medication right while also balancing the bipolar to stabilize the mood component.

In our experience the ECT courses have worked quite well in treating both sides of the illness. If we are super critical we would probably say that the ECT is more effective on the schizophrenia side of things. We find this a little strange as ECT is generally accepted as being very efficient treating depression. But then again, everyone is an individual and everyone’s illness is unique to them.

The medical fraternity is still out on exactly what, why and how not only ECT works, but also a lot of different medications, so I’m not going to try and figure it out. I just know that for my wife and her illness it works extremely well.

So there you go… 5 reasons why we jump straight to electroconvulsive therapy or ECT to treat my wife’s schizoaffective disorder.

Here in Australia, ECT is prescribed as a “course”. Each course consists of between 6 and 9 individual treatments normally done on a Monday, Wednesday and Friday for 2 or 3 weeks. Over many years my wife has had over 100 individual doses of ECT and if she becomes unwell again her file is marked prominently that she wants ECT ASAP.

While I am not a doctor I can relate to you our experiences and what has or hasn’t worked for my wife. I hope you at least found our opinion interesting and look forward to answering your questions and comments below.

Have you had ECT? How effective was it? Would you have it again knowing what you now know?

Ian is husband and care giver to his wife Pauline who has been diagnosed with schizoaffective disorder. Together with their daughter they live about an hour outside Brisbane in Queensland Australia.