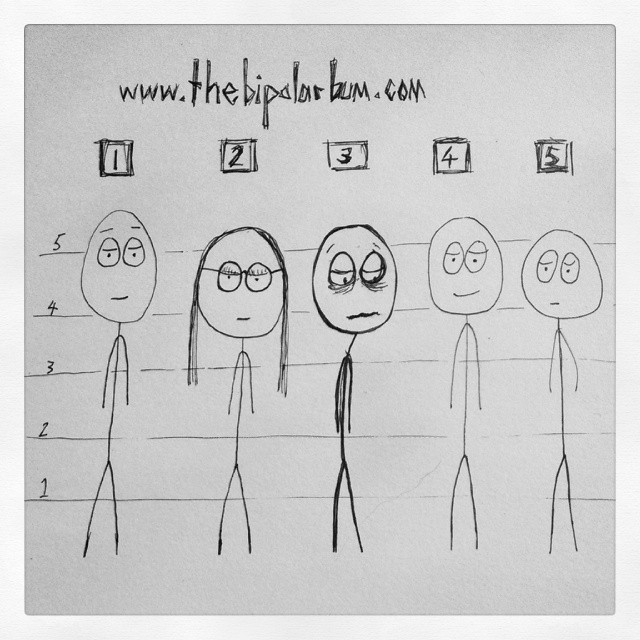 H&J, recently diagnosed at 27 with Bipolar II, highlights some of his insane behaviour that was so socially acceptable it hid his mental illness in plain sight.

Here I am again.

‘Here I am again’ is what I think. The prompt for feeling bad could be anything, but this is the constant when I’m ‘down’. I stood in a tin shed, 10,000 miles from home, discussing with my friend what would later be mis-diagnosed as unipolar depression. A mis-diagnosis that almost killed me.

I explained that I could never get any traction in life. My previous relationships, my previous jobs and my education all ended with me depressed and wondering why I couldn’t move on. My illness shouted out at me that I simply didn’t have the requisite character to deal with life.

When I felt that familiar depression after travelling from the U.K to Australia to do my dream job in paradise – My friend suggested that my depressions were cyclic and had little to do with external stimuli. I had been getting depressed for years and then assigning blame for my feelings to red herrings like quitting a job. The truth I was now faced with was that my depressions weren’t reactive at all – The reasons were just something I wrapped around the depression to try and make sense of it.

In fact what I was failing to describe was Bipolar Disorder but this didn’t come to light until much later when my doctor prescribed me Sertraline and 50mg/day of it rendered me suicidal in a week.

Being diagnosed with a mental illness is to be told that your mental protocols, on which you inherently rely, are wrong. I railed against my friend at first, my ill mind flailing to explain away all evidence of insanity. I denounced symptoms such as paranoia and extreme self-deprecation as common behaviour that everyone exhibits. I pointed out that I had held a day-job for half a decade and therefor couldn’t be ill. Eventually I had to admit to being unwell. Even then – I refused medication for fear of side effects, forgetting that the worst side effect of no medication would probably be an early death.

Post-diagnosis I learned that my dad had Bipolar, but that my parents didn’t know what it was. My dad’s refusal to take ANY medication would have stopped him seeking help anyway. His outright rejection of medication was probably the reason for my own anti-medical prejudice. My only path to diagnosis in England, realistically, would have been suicide or a psychotic break and I was definitely on target for one if not both of these.

The knowledge that I would NEVER have been diagnosed in England irritated me. Whenever I had suggested that I was different in some way everyone had brow-beaten me with platitudes and encouragements. “We all get like that every now and then, cheer up.” they said. ‘Cheer up’… If only more depressed people had access to such wisdom.

The catalyst for my illness was the death of my father. His final heart attack happened when I was thirteen and the level of trauma associated with this event expanded my capacity for pain substantially. This loss violently interrupted my emotional development and the agony of it provided the foundations which all of my subsequent depressions were built on.

The ramifications of early bereavement cannot be over-stated, primarily because of the lack of self-awareness in the young. The most pertinent detail here is that all of my certainty in life evaporated. The entire world gave me the feedback that my life was ruined and I internalised this belief. Bereavement counselling may have helped but we didn’t know it existed.

My mother collapsed into a pit of depression and alcoholism, my father’s family abandoned us and no one had the courage or knowledge to grapple with grieving teenagers. In this power-vacuum I did what a lot of angry, hurt youngsters do; I was dreadfully unoriginal. I engaged in alcohol abuse and unprotected sex with reckless abandon. The British binge drinking culture meant that I was seen as merely ahead of the curve. I was the ‘bad influence’ so extreme behaviour was expected and ignored.

Where I differed from my friends was in my actual experience of alcohol. Alcohol allowed me to blot out the white-noise of critical self-talk that I was ever beset by. “Your life is ruined anyway”, “You’re worthless” , “Things are NOT going to be alright.” ; Racing thoughts I recognise now as the onset of depression and, paradoxically, a feature of agitated hypomania. Drinking to me wasn’t just for fun, it was a method of purging – a mental RAM dump.

The other crucial difference was that my hangovers consisted of crippling phantom-guilt in addition to nausea and headaches. I often awoke feeling as though I could have killed someone and forgotten about it. I often had done something reprehensible and, consequently, I reasoned that my body had developed the habit of automatically feeling guilty after drinking.

College was where I displayed my first OBVIOUS cycling moods though I never identified the pattern at the time. I soared into manic behaviour, believing that I was going to be the next, great Landscape artist. I was often irritated by what I saw as the amateurish behaviour of my colleagues as they worried about ‘inconsequential minutiae’ such as submission deadlines and grades. From the lofty heights of these delusions of grandeur I crashed into a quagmire of self-loathing.

A lot of students doubt their ability but I went from KNOWING that I would be successful, to being absolutely CERTAIN that I was a charlatan, eventually dropping out. I watched people not as bright or hard working as me making life progress that I couldn’t. I felt like a failure, dealing with the fresh grief of a life ruined every time I cycled. “Perhaps they were taught something by their dads.” I remember thinking. I hadn’t heard of Bipolar Disorder.

I became more explosive in dealing with imagined attacks as I grew further detached from reality. I remember cutting off all of my friends in one particular fall-out. They hadn’t invited me out drinking and I became convinced that they conspired against me. I told them that I knew what they were doing and that I could make the hard decision to end the friendship, even if they couldn’t. “I don’t need part-time friends”. They were confused, to say the least.

Learning to understand and cope with Bipolar is a knotted nest of counter-intuitives. You learn that you cannot automatically trust your thinking and that you are not the author of all of your thoughts; your illness can create false ideas. I am still learning to quarantine and oppose these. Constantly monitoring your thoughts is the only way to create an arena in which to combat the poisonous ones.

Whether it was depression telling me I was worthless or mania telling me I was a genius – I had to refute both claims. My most damaging psychosis is the idea that I am not ill; just being self-indulgent. I STILL, and perhaps aways will, have to actively resist this idea lest I abandon my medication.

I have endured fourteen years of damaging beliefs so solidly internalised they do not have a verbal component; it is only by exploring subjects verbally that I manage to assign them words in order to be able to contradict them. I used to think I was getting depressed because of thoughts of my dad, for example; in fact it was the depression prompting these thoughts. My moods had been so long divorced from reality that I had become an expert of providing my illness with an alibi.

Grasping these fundamental concepts is difficult and even now I have to be wary of my automatic assumptions about peoples’ motives. I have learned to NEVER make an important decision whilst in the grip of mania or depression.

The best weapon in my fight against Bipolar has been medication. I take 600mg/day of Seroquel. This drug has changed my life profoundly and, whilst I occasionally lament the absence of manic episodes, I am no longer defenceless against despair. It gave me the space I needed to learn to anticipate and correct a dangerous trajectory in my mood. I now act pre-emptively when I identify a trigger to avoid being overwhelmed.

My diagnosis is the most important thing to ever happen to me. I owe my friends who helped me to this point my life. It has become my goal to pay this forward and do for someone what they did for me.

If you read this and anything sounds familiar to you – don’t shrug your shoulders. I would love to talk to you and explore these thoughts in detail together. You might save a life.

H&J is a twenty seven year old man from Yorkshire in the U.K who left his job and life in early 2013 in search of something better.  What he found, among new friends in Australia that December, was a diagnosis of Bipolar Disorder and finally his unusual life started to make sense.  Initially resistant to his diagnosis, then to treatment, H&J is now medicated and re-learning how to think and live with his illness.  He is the founder of the Skype Support Initiative (http://skypesupportinitiative.wordpress.com/), a peer to peer support network.  He is currently in Tropical Far North Queensland, Australia.