In 1988 I walked into Olympic Stadium in Seoul, Korea during the Opening Ceremonies. It was one of the most amazing experiences in my entire life. To become an Olympic Athlete was a dream come true.  I did not know then that eleven years later, I would find myself in the lowest point of my life waking up in a psychiatric hospital after experiencing a bipolar disorder episode!  I asked myself how could an Olympic Athlete end up with a stigmatized mental illness?

It Runs In the Family

Knowing there is a strong family history associated with bipolar disorder, I have often blamed myself for not knowing I was at risk for the illness.  Both my mother and one of my sisters were diagnosed with bipolar between 1984-1985.  The scientific community has yet to find the exact gene responsible for bipolar, but they are confident enough to say it can be hereditary—I couldn’t agree more.

The first time I remember a severe episode of bipolar depression was when I was in high school.  I was a First Team Parade Girl’s Basketball All-American (among the top 10 high school players in the U.S.) and was highly recruited by some of the biggest college Women’s Basketball Programs, including the University of Tennessee.  After my season ended, I made a commitment to attend Tennessee and join the basketball team.  I was thrilled I would be playing for legendary coach Pat Summitt. It was my dream come true.

But after all the basketball recruiters stopped calling, I began to have symptoms of depression: sleeping much longer than usual, losing interest in activities, isolating myself, not being able to concentrate and gaining weight.  I thought it was just because I was no longer receiving all the attention I had grown accustomed to, but looking back, I know it was a bipolar depression episode.

I managed to recover from the depression and headed off to Tennessee for my freshman year of college.  The pressure of playing Division I College Basketball led me to struggle my entire freshman year and my performance on the basketball court was far short of the expectations people had for me.  By the middle of my sophomore year, I found myself lying in my bed crying uncontrollably and having suicidal thoughts.  This led me to leave school and transfer back home to a college closer to my parents.

The depression lasted for several months. The same pattern emerged of sleeping long, isolating myself, overeating on sweet foods in an attempt to make myself feel better, not being able to play basketball, and really just trying to survive through my classes.  Then it seemed like when the season changed and the sun started to shine, I started to feel better. I am not sure if it was hypomania or a “normal” mood but it was during this time that I contacted the U.S. Team Handball Federation and asked them for a try-out.

One of the best things that ever happened to me was my association with the Team Handball Federation.  After training for three years and traveling around the world to play against competition, I found myself walking into the stadium for the 1988 Olympic Games.  It was an experience of a lifetime.  My moods seemed to have been somewhat stable during the time we were training for the Olympics.  I remember at times having more energy and at times having a difficult time getting out of bed, but none of the mood swings were debilitating.

After the Olympics, I finished college at the University of Arizona, landed a job with a Fortune 500 company and successfully climbed the corporate ladder.  Until one day, my entire world crashed right in front of me.

I was taking a drug called Lupron for female problems and began to have sleepless nights.  I hadn’t taken the time to read the prescribing information for Lupron. If I had, I would have seen it says that it can cause “psychiatric disturbances.”  You should use it with caution on patients with a predisposition to mental illness.  I don’t know if Lupron was a primary cause of my first psychotic episode, but I do know it caused such horrible side effects that I could not sleep.  This lack of sleep triggered a major manic episode and eventual psychotic episode.  I was already in the hospital for some physical problems, when the drugs they were giving me pushed me over the edge.  I landed in a psychiatric facility and was given the diagnosis of bipolar disorder.

The hospital treated me for bipolar disorder but only kept me for six days.  It was not long enough to stabilize me from this major psychotic episode.  I felt confused, lost, disoriented, scared and completely devastated.  After years of watching my mother and sister struggle with bipolar disorder, the last thing I wanted to have was the same diagnosis.  “How could God let this happen to me?“ I thought.

When I was discharged from the hospital, they gave me four prescriptions for medication.  I spent more time denying I had bipolar disorder than trying to understand what the medications were for and how they might help me.  I was overwhelmed with what I had gone through.  I think one of the most dangerous situations living with bipolar disorder is if you have a psychotic episode and lose touch with reality.  When you don’t know you are sick, you can’t monitor your behavior, thoughts, actions or reactions.  You are just lost in a world of confusion.  It’s the worst thing I have ever experienced.

After a whirlwind of landing myself in a second psychiatric ward in a week, the doctor who examined me told me I didn’t have bipolar disorder.  He said I was suffering with anxiety disorder and that the Lupron probably caused the psychosis.  He handed me a different handful of medications and sent me on my way.  His mis-diagnosis would cost me another trip to the hospital and a world of confusion would set in because I was given two different diagnoses in a month.

I have read that on the average, it takes 10 years to get an accurate diagnosis for bipolar disorder and people get misdiagnosed frequently.  When I told my story to a group of peers one man told me to “join the club.”

The long arduous bipolar journey would take me 13 years and 10 hospitalizations before I found the right regimen of medications.  Over those years I suffered a tremendous amount of loss, including losing many of my friends and eventually my job.  While I was out on disability leave during a major bipolar depressive episode, the company I worked for fired me.  This, of course, devastated me, but in the long run was probably better for my health.

As you can imagine, my experiences in the psychiatric hospitals were incredibly painful.  When you have a psychiatric patient encounter, you lose your confidence, self-esteem, and often, your dignity.  I remember looking at myself in the mirror and wondering where the Olympic Athlete went.  She was still there, but I had to find her.  I had to learn how to appreciate all aspects of myself—including accepting myself as someone who lives with a mental illness.  Bipolar disorder is not all of who I am, but learning to live with it has impacted who I have become.

I used much of my sports background to help me recover.  In sports you compete and when you set foot onto the field or the court you believe you are going to win.  I decided to take on bipolar disorder and I made up my mind it was not going to beat me!

I never dreamed in a million years that I would get diagnosed with a mental illness.  What I learned was mental illness does not discriminate.  It affects people of all socio-economic levels, with or without college degrees, and it even impacts Olympic Athletes.

If I could offer any suggestions to people who are newly diagnosed with bipolar disorder, I would say:

Finally, never give up hope.  Hope is often the key to recovery. 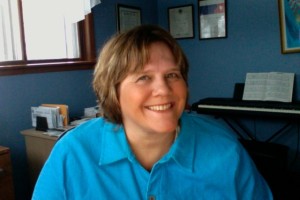 Amy Gamble is a small town girl who has always had big time dreams.  She followed those dreams all the way to the Olympic Games.  She is now the Executive Director of NAMI (National Alliance on Mental Illness) of Greater Wheeling.  She is a Certified Mental Health First Aid instructor and a mental health speaker.  Amy has over 18 years experience in the pharmaceutical and biotechnology industry.  She has worked on Disease State Management Programs and worked as a consultant to the pharmaceutical industry authoring a Depression Training Manual for clients.  Amy has a M.A. in Organizational Management and a B.A. in Communication.

Amy’s mission in life is to help those who live mental illness and their family members find help and hope.  She strives to eliminate stigma by sharing openly her struggles and triumphs of living with bipolar disorder.