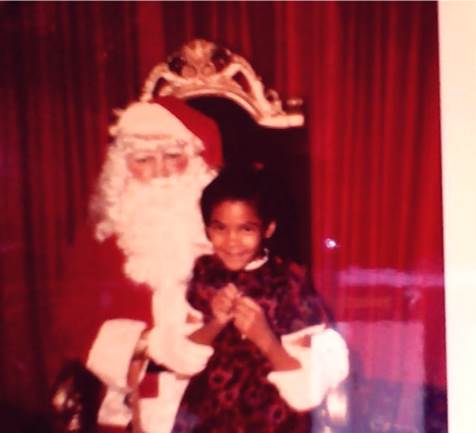 When I think back to my earliest childhood memories, many emotions flood my mind: love, hate, confusion, anger, fear and rejection. My earliest recollections are from approximately 5 years of age.

I grew up in a household of domestic violence. My father was a functional and abusive alcoholic. His wrath was targeted at my mother and though I had no physical bruises, the mental scars remain. I witnessed, on a fairly regular basis, him yell, curse, slap, punch and strangle my mother like she were a 350lb man.

Many times I stood helplessly by as my older sister and I screamed and cried for him to stop.  Sadly this fell on deaf ears. I felt invisible.

My sister would stay. I would inevitably run into my room and cry and shake. I felt scared and helpless.  I also (now in retrospect) felt guilty that I could not help nor save my mother. I was so confused; how could my Father, this man I loved so much, become this monster and hurt my Mother who I also loved very much?  My young mind could not process it all.

The signs of damage begin…

It has not been all doom and gloom; I have a wonderful, strong, loving mother who when I was 10 years old told my Father to leave the household for good. She raised my sister and me as a single mom. We were the three musketeers.

She struggled financially but managed to put us both through catholic school.

I was painfully shy growing up–always afraid of other people’s opinion of me—feeling insecure and uncomfortable in my own skin. I saw my first therapist at 10 years old after my mother and father separated.  I was nervous.  Even with the chaos, I wanted the picture perfect “Brady Bunch” kind of family I loved on TV.

I managed to live a productive life; graduate high school and attended college, though I left before I got a degree. I was always able to find work as a secretary though and live what most would call a “normal” life…for a while.

During my life I grew up extremely nervous and anxious, which eventually escalated into full blown terrifying panic attacks. I was put on medication to control them in 1996, and presently still require them.

In my teen years and into adulthood I always had this fairy-tale, unrealistic view of life. I was drawn to the daytime soap operas, where the handsome man falls madly in love with the beautiful woman.  I just knew that was my solution. I felt that once I got married the sadness and the emptiness and the depression would just vanish into thin air. Oh how I learned the hard way.

If a boyfriend broke off our relationship, I would panic and feel devastated –abnormally so to the point of begging him not to leave me. I was constantly looking for someone or something to validate me, and to fill the emptiness I felt.

But if my own biological Father was both physically and emotionally distant and absent from my life, what standard was set for a healthy male/female relationship in my life?

I married an abusive alcoholic. Oh the signs were there while we were dating but I chose to ignore them.  I knew I could save him; I would fix him. I also felt desperate; I was 26 years old and I distinctly remember thinking what if NO ONE EVER asks me to marry them again. I never felt good enough or worthy enough to realize I deserved more. My marriage lasted about 11 months; long enough to produce my beautiful daughter and for that I will never regret.

As life went on, I raised my 2 children as a single mom.  I worked and had friends.  At that time I was diagnosed with clinical depression and panic disorder and the medication I was on seemed to be working.

The beginning of the end was in June 2005 when my Father informed me his prostate cancer (which had been 8 years in remission) was back. He died 6 months later on December 30, 2005.  This is when I spiraled into the deepest, darkest depression of my life. I could not deal with the finality of losing him, so much still left unsaid, the Father I loved so very much and forgave was now (in my mind) abandoning me once again and this time forever.

During this time I did not care about much and I was in a fog.  It was then that I was diagnosed with Borderline Personality Disorder (BPD) and Bipolar II.

One day after his death I was told by a family member that I was disowned from his will (he changed it 6 weeks before he died). Why? The wording in the will stated that he left all to my sister, and to me, he (and I am paraphrasing as I have blocked it out) left nothing due to her “consistent and irresponsible manner in which she conducts her financial affairs”. This from a man who would blow his whole paycheck on liquor on the weekend while he had a wife and 2 little girls to feed.

It was never about the money; my sister gave me my portion and he was no Donald Trump. But for me it was the ultimate betrayal–the ultimate rejection.  To me he was conveying the message “I don’t love you and I never did.  I don’t care how this will affect you when I die.  I don’t give a damn about you!”

At his wake I was numb–a walking shell of a human being.  I looked at him in the casket and it was like looking at a stranger.

It destroyed me this one act; this legacy he left me.  I could not trust or believe that he ever truly loved me.

Soon after I started to spiral down fast and I stabbed myself.  I could not function or concentrate and eventually lost my job. I spent money constantly looking for that temporary high. I shoplifted; not jewelry or expensive items but cans of soup or mascara, when I had the money right in my pocket to pay. I was even caught once, and yes I got scared, vowing to myself to never do it again but I eventually did.

I did not know this person I was becoming.

I have been in the mental hospital 3 times; 2 times for self-inflicted wounds with a knife.

A glass half full… on to healing

I think having to deal with a mental illness is extremely lonely; it takes a toll not just on you but on all those who love you. They don’t understand why you can’t just “snap out of it” or “pray it away”. And many times it is so hard to convey the emptiness, despair and hopelessness you feel.  I became very angry, violent and verbally abusive towards my family and I also isolated myself to the point where friends stopped calling.

I am presently taking medication for the Bipolar, depression and anxiety. I have seen many therapists through the years. As for the BPD; I continue to educate myself about this illness.  Reading the stories of other people who suffer from this on the Internet helps; their journeys make me feel less alone and hopeful.

I know it will take hard work but I want to get better, I want to understand me, I want to love Karen and realize she has worth, she has value, she is not a mistake. I know I have a long way to go but I am hopeful, and I want to encourage anyone reading this to never give up!

If you are a Christian as I am then pray; I am not saying it is easy and God knows I have my struggles with faith, but I try to push through.

I am grateful to have been given the opportunity to tell my story and to say “don’t give up”.  Yes there have been days and still are where I feel I can’t do this because it’s too hard. I want to be “normal” but what and who is “normal”?

We are all fighting some battle. If I find myself getting to an unhealthy place in my thought process, I try to utilize some tools I have learned such as putting on some music, calling someone you trust, watching a comedy or even cleaning (that’s one of my favorites for some reason).  It does help and it works. I cannot allow my mind to stay stuck in the negative anymore.

I also started journaling which is a great outlet for your feelings. I am also in the process of making peace with my father; I do love him, miss him, and now need to grieve for the loss of not just his life, but the part of Karen that died that day with him.

I’m a work in progress… a new chapter has begun.

Picture:  yours truly with Santa.  This is me at about 5 years old… so shy. 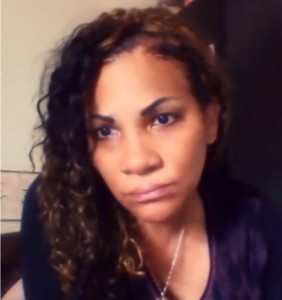 K. Maria enjoys reading, decorating and spending time with her family. You can follow her on Twitter at karen93089343.

You can view all of Karen’s MHT guest posts by clicking here.