First of all, thank you Tricia for the invitation to contribute to your much needed website.

Above is a speech I delivered to my high school, Ashbury College, in Ottawa, Ontario. It was an amazing experience because it’s where I first fell into depression, schizoaffective disorder, and bipolar disorder. I’m sure this happens frequently; my diagnosis changed over time.

Depression began in Grade 11. Anxiety built exponentially and in the fall of 2000, I found myself in a state where I knew I was “losing” my mind. I refused to go to school. I had to “figure out” what was happening. I had seen numerous doctors at this point and had been on an anti-depressant for about 8 months. I couldn’t sit still. I had to leave the house at night. I began to feel as though I was fighting something more important than everything else around me. I was mixed with grandiose feelings of supreme importance while running from something dark.

It was too hard. I was too confused. I had no idea how to handle it and I was increasingly self medicating with alcohol and marijuana, simply lost with no road map. My parents had no idea what to do either but what seemed to be the worst? I was hit with this label. I have “clinical depression”. I was “mentally ill”.

WHOA!! What did this mean!? Being thrown into a category based on having an imbalance immediately made me feel second rate.

After hospitalization, my diagnosis changed to schizoaffective disorder. I felt strong symptoms of paranoia as though everyone was “against” me, as though my friends and family hated me and wanted to harm me. I was afraid to leave the house. I felt suicidal for weeks on end. When I look back on my journals, all I wanted was a “magic pill” — something to get me out of this state of mind.

I was on and off about 13 medications within a few years. A large part of the negativity was the feeling that I wasn’t “allowed” to feel that way. I had an “illness”. It was an intimidating label.

By and large, I worked extremely hard to get to where I am today. I had years of trial and errors with medications. I studied Cognitive Behaviour Therapy in-depth and created some techniques of my own to gain understanding and insight into what was really going on in my head.

The most effective psychological viewpoint was viewing myself from a third perspective. I have a label = yes. I feel awful = yes. I believe people are out to get me = yes.

As soon as I could truly understand that this is what I believed and NOT the way I wanted to feel or what I wanted to believe, I created a picture in my mind of a lens.

Everything I was feeling was coming from that particular lens of perspective. If I was to find a healthy mindset, I had to create The Lens I wanted and fight to feel it. Fight “to see through it”.

I took on a new habit of looking after myself and being a friend to myself.  I was finally able to at least partially release the grasp of stigma.  I decided that I am who I want to be.  Period.  I love myself for everything that I am, label or not.

I began to notice that no one in the world is absent from stress, sadness, or anxiety.  I started glancing at the bigger picture  — simply existing in this lifetime is miraculous.  Being able to feel good is such a blessing.  The greatest gift of these experiences is the incredible gratitude I have for feeling good and for simply being present.

I believe we need to do something about the labels; even tweak them ever so slightly so they’re positive.  Enough sickness.  Enough illness.  We all have our point of views and we can shift them.  If you’re “ill”, you can learn from it.

I’m not belittling the extreme feelings of any mental illness, I’m basically attempting to change our perspective of them.  Almost everyone with a diagnosis I’ve spoken to hates their label.  “Sure these are very serious feelings but if I’m going to feel better, I need to believe there’s a reason for this.  I need to believe I’m fighting this fight to get somewhere.  I need to believe this journey is exceptional”.  That’s the type of mentality I dove into.

My doctor switched my diagnosis from schizoaffective to bipolar after I eliminated much of the paranoia.   All I know is that I have learned so much from these challenges, so much from the wide range of perspectives.

You can call me whatever you want but I’m Brooks Hunter and this is all of me.  If I’m going through a challenge, it’s important to feel like I can express myself, speak out, and not be ostracized.

I’m going to take the lessons I’ve learned and make the most of them.

When I look back, I wouldn’t have changed a thing.  Going through all of this had made me who I am.  It’s been a wild ride and I’m appreciative of it all.

I’m working on a project currently entitled The Lens.

Thank you very much for reading. 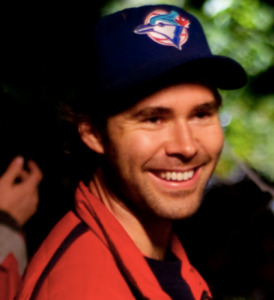 Brooks Hunter is the founder and principal filmmaker of Toronto-based Robanzo Pictures (www.robanzo.com), a production company specializing in creating original motion picture content.  Born in Vermont, U.S., Brooks grew up in Ottawa, Ontario with a video camera in his hands.  By 15, he had directed over 40 short films and notably earned international praise as the winner of the Greenlight Youth Film Festival’s Best Long Form Production for Dirty Cops and a year’s supply of Kraft Dinner for the National “Gotta be KD” Film Competition.

After graduating from Sheridan College for Media Arts in 2005, Brooks was selected to work at The Dr. Phil Show on the Paramount Pictures Lot in Hollywood, the Los Angeles and Cannes Film Festivals, and for Academy Award winning producers at the Toronto International Film Festival.  While living in Los Angeles through 2006, he worked on numerous sets as a Production Assistant, 2nd Assistant Director, and Camera Operator.  Learning the business from the inside-out was an incredible benefit alongside the hands-on training he experienced in College.

In 2007, he began directing a slate of larger-scale short films which have been screened at film festivals around the world.  Two have been distributed by Ouat Media out of Toronto.

He has recently completed his first feature film, Kenneyville, as director, writer, and co-producer. The film was distributed across the US and Canada through Media Blasters in New York City. It had a limited theatrical release and is now available at Best Buy, Walmart, Barnes and Noble, Amazon, and the Playstation and XBOX Networks.  His commercial reel is quickly expanding with the completion of Samsung’s Galaxy S Fascinate 4G Commercial and being a new addition to Shooters International’s Commercial Roster.  He has numerous new feature films in development and is currently directing the behind-the-scenes documentary of Penthouse North, a thriller feature film starring Michael Keaton and Michelle Monaghan, directed by Joseph Rubin, and produced by Lionsgate.

Leave a Reply to Brooks Hunter ×