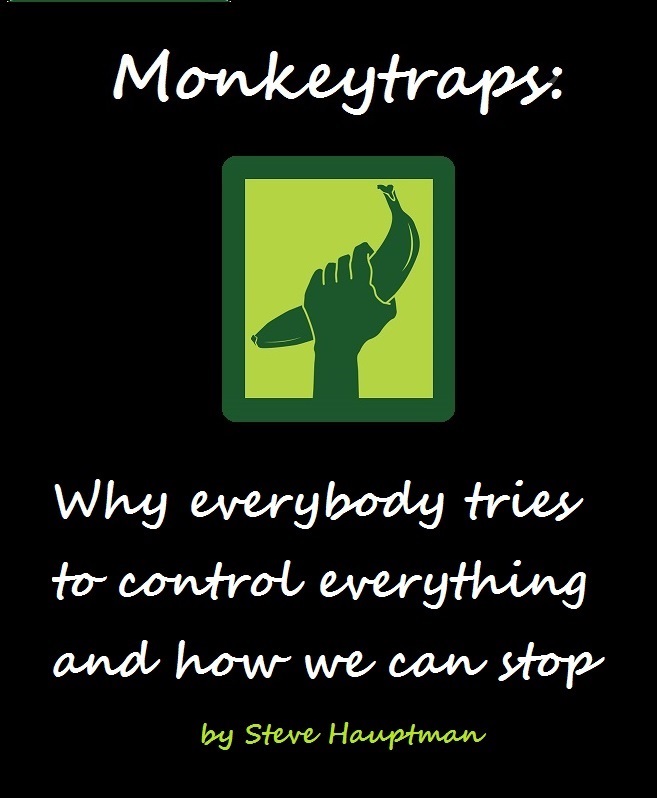 Whenever I meet a new client I ask him or her the same question:

“What do you know about you and control?”

The answers I get vary widely. But nearly everyone ends up admitting, in one way or another, that control is pretty important to them.

On Tuesday I met a new client – let’s call him Bud — who answered my question with a shrug.

“Nothing,” Bud repeated. “I have no problems with control.”

I was surprised. I’d always assumed everyone has at least a sneaking suspicion that control issues figure in their need for therapy. But Bud disproved that.

So, suspecting that there may be other Buds out there just as clueless about the role control plays in their emotional lives, I decided to write this.

Because this, friends, is important stuff.

The idea of control is the single most important idea in anyone’s life, whether or not they’re aware of it.
So here’s what you really should know about control:

Control, as I define it, means the ability to dictate reality — to make things the way we want them to be. To edit people, places and things so that they meet our needs and match our expectations. To edit our own thoughts, feelings and behavior so as to maximize pleasure and minimize pain.

We human beings chase control in a gazillion ways, ranging from huge (starting wars) to tiny (changing channels), from mindful (exiting the highway) to unconscious (forming expectations), and from dangerous (beating a child) to innocuous (scratching an itch).

However you explain this urge – and I blame it on our oversized, restless brains — it’s both an elemental part of human nature and the one that most clearly separates us from other animals, who pretty much have to take reality as it comes.

So familiar is this urge that we barely notice it. Most of the controlling we do is automatic and unconscious. And if you were to meet someone who’s not automatically controlling (think: Dalai Lama) that person would probably strike you as, well, unhuman.

What makes controlling an addiction? Several things. But here’s the most obvious:

Addictions are famously difficult to give up.

Try giving up control for a day, and see how you feel.

Hell, try giving it up for ten minutes.

We tend to overcontrol two things: our own feelings, and other people.

There. I just summarized 99% of what I talk about in a typical working day.

The most common problem clients bring to therapy is emotional constipation: the suppression of normal feelings.

We suppress feelings out of fear. There are plenty of benefits to living with other people, but its chief curse is that we spend our lives terrified of how they’ll react if we dare to reveal ourselves emotionally.

It’s this curse that makes us sick. I’m not exaggerating. To deny feelings is to go to war with your own body, ignoring both its intelligence and its needs.

One of my clients was an MD, and I asked him what practicing medicine had taught him about human beings.

“That no illness is purely physical,” he said.

When you bury feelings, dis-ease grows.

3. Behind all controlling is the wish to control feelings.

We seek control because we believe we’ll feel better with it than without it.

We all believe this, without exception.

And it’s true enough, as far as it goes. Unfortunately most of the time (have you noticed?) reality is beyond our control.

What then? How handle feelings you cannot avoid?

Having no alternative to control leaves you hopelessly addicted to it — forced to manage your emotional life by compulsively wrestling people, places and things into submission, and condemned to helpless anxiety when you can’t.

Luckily, there are alternatives.

4. There are better ways to handle feelings than control.

There are, in fact, three:

None of these is easy to learn or practice. People who choose them do so because they’ve come to realize — like any recovering addict — that being addicted to control is an even harder way to live.

This is important stuff. Stuff everyone needs to know.

Because in the end, control is far too important an idea to leave to therapists.

Steve Hauptman, LCSW is a Gestalt-flavored psychotherapist on Long Island, and the creator of the blogs Monkeytraps, Monkey House and Bert’s Therapy. He is also the author of a new book, Monkeytraps: Why everybody tries to control everything and how we can stop, currently being serialized at monkeytraps.com.

If you want to know more about Steve’s new book, he has recently done an interview on Dwight Hurst’s podcast “The Broken Brain” and you will find the announcement and the link to the podcast here.

Steve has done a number of guest posts for MHT. You can read more from him here.