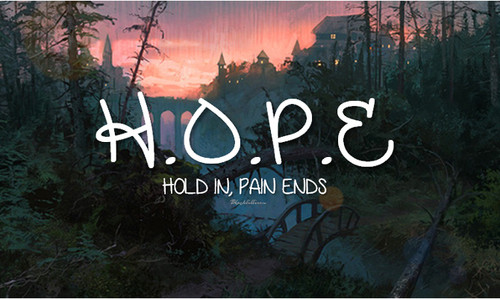 Every experience is something to learn from

I am just 16, but have learned many things in that time. My family is strong, even with the problems

All that might have contributed to my depression, which lead to cutting and suicide attempts. It might even be why I have been in hospitals six times. All this has taught me many things though and I want to share them with you, and maybe help show you, you’re not alone.

Things started after my grandpa died. I never handled it well, hid my feelings and soon developed depression. I tried hiding that, but after cutting multiple times and a suicide attempt, my secret was out. I ended up in a hospital, just to get out and end up in another. I felt that no one understood how I felt and I was completely alone. During my 6th hospital stay though, something changed.

There is a light in the darkness

I wouldn’t call it “seeing the light”, or even my new meds. Divine intervention?, maybe. All I know, is I saw light at the end of the tunnel. It was a small light, but it was my hope, and I became determined to have it surround me.

I didn’t decide right away to stop cutting, and I didn’t achieve it alone. While I was at the hospital I met people that completely changed my life…

There was a staff person who helped lead me back to God and to learn He is always there for me. There was many other staff that did little things that had a big impact on me. There was also a staff person who I call Ms. Batman. She’s given me words of advice and inspiration through her many words of wisdom. One that I think is very inspiring is; Nothing’s Instant Coffee. What that means is, you can have an instant cup of coffee but, it’s nothing compared to a cup you work to make. So I interpret that as, you can have your life as is (just an instant cup of coffee) or, you can work to make it how you know it can be, strong and rewarding.

So gradually over time I decided to work and make my life strong and rewarding.

With the help of Ms. Batman, I started out on a long and very trying journey that I hope as you read this might help you make it through yours. I learned that the things that are normally the hardest, are the most important to fight for. Sometimes you want something and might even know it’s the right thing, but having to fight for it, especially when you are fighting your inner self, it doesn’t always seem worth it.

Fighting for anything that you believe in and know is right is something you should never give up on. For me I knew cutting wasn’t right and I should stop, but at the time that was what was working for me. It lessoned my emotional pain by replacing it with physical, it still hurt but I was in control. I didn’t know that once I did decide to work for the life I knew I could have, the hope I had been searching for would find me.

When I first stopped cutting it was hard, but I decided I didn’t want that in my life anymore. There were many times where I wanted to give up on it all, then I looked at it differently. I decided that I would not let my urges control me, I was a survivor, I am a survivor. I was going to live, find that hope, and give it to others. I am going to help anyone that I can and try to help them see they are not alone.

The night will end, the sun will rise, YOU WILL SURVIVE

You may be struggling right now and just so tired of fighting, but I am telling you, do not give up, don’t accept an instant cup of coffee. What you’re going through is meant to happen and you might help someone else see that. Your road may be long, dark, and confusing, but don’t lose sight of the light at the end, no matter how faint it is. Just hold on because the pain will end and hope will surround you. It won’t always be a strong and bright light, trust me, I know. The urges will still be there and sadness will come every now and then. So just remember what you are fighting for, the night will end, the sun will rise, and you will survive.

Aber Love is just 16 but has learned many things in that time. She has battled depression and has survived cutting and suicide attempts. She now wants to share her story with others so that they will know they are not alone.