It was a sunny day in January with piles of snow littering the ground. It was freezing cold yet the sun warmed my car up faster than my heater did. I decided to go out with my friend that day and take pictures at the park, just for fun. I dressed up in black and white pants with suspenders attached, unplugged my iPhone, and picked up my friend in my car.

My friend wasn’t a professional photographer but the contrast of the sun and snow along with her iPhone skills, the photos of me turned out beautiful. I am not a person to ever say I even look decent, so this was saying a lot. I went home that day with at least 100 pictures and I had a urge to post them all over social media. I edited them, made sure the blemish on my face was gone, and put a filter on them. I was SO excited about these pictures. I posted them on Instagram, changed my Facebook profile picture to one of them, and put on Twitter my favorite one.

It turned 9:00 pm that night and I was getting amazing feedback and compliments on these pictures we took at the park. The one where I took my coat off in the snow had someone saying “you look so confident!”. The one where the wind was blowing across my hair while the sun illuminated half my face had people putting heart-eye emoji’s. I was liked. No, I was LOVED. I have never had people compliment my appearance before, so I was on cloud nine.

I decided to go to bed around 10:00 pm. I turned off the lights, settled under my covers, and put my phone down on the bookcase right next to my bed. I laid on my bed for 15 minutes, wide eyed and staring at the ceiling. I checked my phone for more likes on my photos. I put my phone back down, face up this time, with the brightness turned all the way just in case I get another notification. Then, out of nowhere I started shaking. It first started in my hands, then my arms, then lastly, my chest. My heart was pumping more than normal but it wasn’t like I couldn’t breathe. It was all just enough to know that something wasn’t right. I was laying on my back, just shaking. It was like I was having an anxiety attack, except…it was because I was happy and excited. I was so happy because I was getting noticed for once, from those pictures.

I tried to count down from 10 to calm myself. It didn’t relax me. I tried doing deep breathing. Nothing. I was still shaking in my arms but my chest was calm. I had been diagnosed with bipolar 2; I wasn’t suppose to have manic episodes! That was bipolar 1! What was going on?!

I ended up going to sleep for 2 hours out of that whole night, when I need 10 hours to function normally. I was restless, too, but somehow I stopped shaking and also stopped checking my phone every 2 minutes. I got up out of bed for work the next day and I was in a strange mood. Half of it was because I barely got any sleep but the other half was because I was afraid it was going to happen again. What if it happens in public? I was more scared about it the day after than when it was happening. I didn’t want to go through that again.

I made a Facebook status that asked for tips to handle a manic episode because I knew a lot of people on my friend’s list have some sort of mental health issues, too. I got very nice answers like “breathe” or “meditate” but in the midst of my so-called episode, I couldn’t calm myself no matter what I did.

I went to my psychologist fairly soon after. He told me what I had was a hypomanic episode, which is what bipolar 2 people have. Hypomanic episodes are a form of mania but a little less severe. The behaviors for hypomania can include decreased need for sleep, grandiosity, distractability, and a flight of creative ideas. My doctor then told me if it lasted more than I day, I had to call him right away. I would more than likely need to be put in a hospital if it lasted a few days or longer. Mine only lasted a couple hours, but that really scared me. He then told me if it does happens again, to take a Melatonin and I’ll be fine (and to turn off my phone at night).

I haven’t had a hypomanic episode since then, but in the back of my mind, I’m a little worried it’ll happen when I’m around people. But if it does, I have a plan to excuse myself and do deep breathing. I’ve learned some things since that night and I’d like to say I’m prepared. The number one thing I learned? I should always turn off my phone at night. 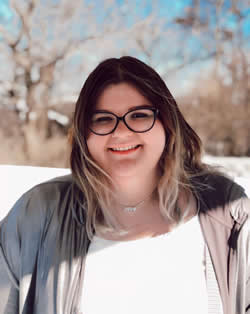 Megan Hubrex is a part time writer and a full time advocate. She enjoys speaking and writing about her life experiences in hopes of opening a conversation about mental health.