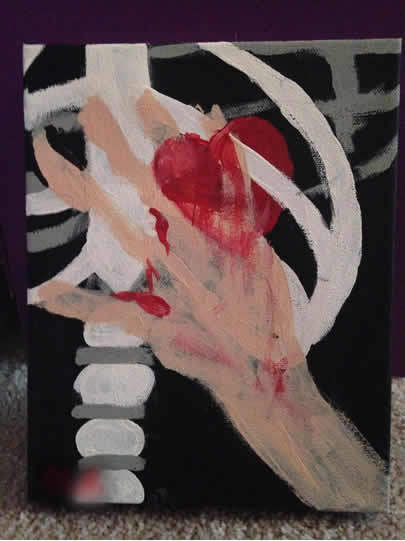 The disappointment of not actually dying

One day I woke up and felt like I was dying. It won’t be a suicide, so it won’t hurt the few people who care about me as much–I’m just naturally dying of some strange ‘shaking disease’ at the age of 14. I won’t have to go to school today! These were the comforting thoughts I felt some morning in December 2014.

After the shaking stopped, it was like I had been electrocuted while simultaneously drinking 100 cups of coffee. I jolted out of bed quickly. So I’m not dying…but something very strange is happening here. Hmm, weird. I get up, coming to the saddening conclusion that I’ll probably have to go to school. I start to get ready. Shaky hands grab the first clothes I can find, I look in the mirror to check my outfit and put my makeup on. What the hell? My pupils are dilated, I don’t mean a little big. I mean, for lack of a better example, it looks like I just ate an entire farm of magic mushrooms.

I look at the light directly, trying to make my pupils get back to normal. Nothing. I’m suddenly feeling myself become seconds away from my frequent panicky state.

“MOOOMMMM!” I yell. She’s in the basement of my great aunt’s house. This is where we live, because we lost our little apartment about a year ago. She groans tiredly, but eventually comes up to where I am. Neither of us know what’s going on here, but I have to go to school and if it’s worse tomorrow we’ll go to Urgent Care or something.

I don’t remember everything, but I remember kids in the hallway saying “Whoa, what’s wrong with you?” or just pointing and laughing or furrowing their brow. I didn’t have many friends, which upset me at the time, but I was never the center of attention like this–and it was terrifying.

On top of whatever strange thing is happening to me (which is getting worse by the minute, but I know I have to make it through the school day or mom will be mad. And worse, my great uncle will give me the look of disapproval that I get so frequently. I know that will cause my social anxiety and constant self analysis and criticism to skyrocket), I am now having a panic attack. I have a generous amount of Klonopin in my backpack but everyone’s looking at me, and you’re supposed to keep medicine in the nurse’s office. I rush to health class with my head down.

We’re watching some censored variation of the Magic Johnson’s HIV video. I’m not sure if I fell asleep or was just incredibly spaced out, but I hadn’t even realized class was over until my teacher asked me if I was okay. Although the world seemed to be going considerably faster than me, I just nodded that I was okay and rushed off to my next class.

I must have been really out of it by now, because even though I insisted that I was fine I was escorted to the nurse’s office. The school nurse informed me that she was not a nurse, and that she had no idea what this strange ailment was. She took my vitals, my heart was a little fast from anxiety and my temperature was normal but my blood pressure was dangerously low. She informed me that it was probably best that I go to the Emergency Room. Dreading disapproval that I expected, I went and curled up in a ball on a cot until my mom arrived.

After quick admission into the hospital, even the doctors were perplexed about what could be wrong with me. The final conclusion was that I was suffering from serotonin syndrome. If I hadn’t been admitted to the hospital, and took another one of my Lexapro (as prescribed) it is likely that I would have died.

I still think about how close I was to death, and it often bothers me that I hadn’t unknowingly taken that last pill that would have likely stopped my heart. It really ate me alive, I remember sitting on an airplane the next week thinking thoughts like; I hope the plane crashes, gently, and I’m the only fatality.

I had been suicidal for almost three years at this point, but knowing I had enough pills now to likely kill me, it had drastically worsened. I had always been scared my attempt would be in vain and unsuccessful. To this day, I still have an accumulated stash of prescribed and over-the-counter anti-depressants and anti-anxieties, and sleeping pills. I don’t plan on taking them, but the thought of discarding such an easy out seems foolish.

Before; the constant accumulation of problems and “solutions”

You know those families on television that claim that they’re oh-so-dysfunctional but are really just quirky and adorable and near the most functional family you’ve ever heard of? I had something so close to that once. A mom and dad, each remarried to someone new. Three little baby siblings, two from dad and stepmom and one from mom and stepdad. Two birthdays, two Christmases. Back and forth twice a week. Family vacations. Television family.

I think it all fell apart in literally one day. My dad came over to my mom and stepdad’s house. He sits me down, solemn and distraught. My mind immediately jumps to two conclusions: my stepdad had died. Which would be sad, but I would get over it. Or my dog had died, which would be much sadder and harder to get over. I immediately yelled at myself internally for liking my dog more than my stepdad. Not that anyone knew that I didn’t like my stepdad quite as much as I put out.

Now, I do wish that my stepdad had died instead. I think it would have been much easier on everyone, really. But it was worse, and I didn’t even believe it at first.

About a week later, I realized what had happened. It was pretty stereotypical. A young receptionist with big boobs. You know the rest. I figured it out in a science museum where I was with my dad, siblings, her and her mom. It was painfully obvious in my eleven year old eyes that my own dad was a cheater. And you know it must have been pretty obvious if an eleven year old could figure it out.

Well, my mom was jealous of my stepmom for being able to shake a husband she was unhappy with. By the next January we were in our little apartment, we hated it so much. But we’d kill to have it back, now that we’re separated by over 150 miles.

Things escalated rapidly downhill from this point on. I mean, extremely rapidly. My mom never really liked my stepdad either, in fact he was emotionally abusive to both of us. Much worse to my mom, who was always sweet as can be. Both my mom and dad fell poor. I lost all touch with the woman who raised me. I quickly developed very severe depression and anxiety, and lost the majority of my friends.

My mom and I were hospitalized together, on different floors. I lied my way into not being admitted, but stayed in the holding unit for four days. Mom was admitted and stayed for a week.

Everyone always promises it’ll get better. That tomorrow is a new day. That this medicine will surely work. That therapy fixes everything. That there’s no reason someone this young should be depressed and have anxiety. That I’m dramatic and faking it.

I was promised solutions, and only given more problems. Self induced, situational, and even imagined. Self harm, disassociating, panic, insomnia, depression, abuse, pseudo-homelessness, generally viciousness, zero structure or stability, and my mind fighting against itself.

The solace with a sharp point

It has become my favorite solace to read psychology books, memoirs, case studies, psychiatric studies and more. The only psychiatrist that I didn’t chronically lie to, one of my favorite women in the world, that I truly owe my life to, she says I will grow up to be the world’s best therapist or psychiatrist, or something in that field. With my undying empathy, experience and fascination, I am bound to be the best. That’s what she said.

I usually hate it when people tell me I’m the best, or am going to be the best at something, because I know I’m not. It’s great for people to tell me that I’m a great artist, a wonderful writer, a musician with true potential, a good softball player (this one was just flat out lies, I am the most nonathletic person ever). It’s just hard to believe. I don’t think I’ll be the best out there, but I do think I’d be really good at helping people.

I have had the school counselor refer people to me, I am a trusted secret keeper and built up a “kid therapist” reputation among peers. It helped me to help others even if I wouldn’t let anyone help me, and on the rare occasion I let someone try, things typically ended up worse.

Today, I love psychology, and I want to help as many people as I can. Comment on this post and I’ll even do my best to help you. But this hobby if-you-will has a sharp point to it. Education has led me to believe I am wrongly diagnosed (which I unbiased think that I am). I think I placebo myself into imagined symptoms and have let this romanticized idea of “utter and complete insanity” overcome my mind. I know I’m for the most part mentally intact, but then I think and think and think and realize that I am absolutely insane. I know first hand that mental illness is nothing to be romanticized, it’s miserable, not fascinating. Yet I still almost wish I could just completely disconnect, and truly lose it. Maybe just so that I don’t have to be so painfully self aware of my own deterioration.

Alice Roxanne loves psychology–an interest that has resulted from her own mental health experiences. She has found by helping others, she helps herself.