As the mother of a teenage daughter with severe depression, I have seen the many sides of mental health stigma. It’s easy for people to blame parents if their kids have depression, anxiety, OCD, or any other mental illness. The parents are either too permissive, too strict, too affectionate, not affectionate enough. It’s easy to be judgmental when you’ve never walked in the shoes of some of the bravest parents I’ve met during my own journey with my daughter.

But I never expected to be slapped in the face with mental health stigma from health care workers. Almost a month ago, my beautiful daughter was in so much pain she tried to end her life by jumping off our second story deck. A fall of 15-20 feet. I couldn’t get to her in time and will have to live with that for the rest of my life.

When I called the local paramedics, I never expected them to be rude to her because she’d made a suicide attempt. I never expected they would think she was exaggerating the pain in her back. I was shocked by how roughly they rolled her onto the backboard, rebuking her when she yelled out in pain. “Well, it’s going to hurt,” one of them barked at her.

It only got worse from there.

I arrived at the hospital shortly after my daughter was placed in a room in the pediatric area of the emergency room. She lay on a backboard, her face pale, her eyes pained.

The nurse was short with me, her words clipped. I assumed it was her personality or that she was incredibly busy. I was told they’d given my daughter morphine because she said her pain was a 10 out of 10. They were getting ready to take her to get x-rays of her back, but she could wiggle her toes and feel her feet.

“How’s your pain?” I asked my daughter.

When the nurse walked back in, I told her that my daughter hadn’t gotten any relief from her pain.

“That’s impossible,” she huffed. “We just gave her four milligrams of morphine. I’m sure it’s kicked in by now”

Tears leaked from my daughter’s eyes and her voice shook. “Why won’t they believe me?”

My daughter knows pain. She had been a dancer, a serious dancer in ballet training 6 to 7 days a week. There were painful hip injuries, blistered, bleeding feet, sprains, rolled ankles. My daughter sucked it up and danced through almost every injury with nothing more than ibuprofen.

I caught the nurse again a few minutes later and pleaded for more morphine for my daughter. By some miracle, they agreed to give her a few more milligrams through her IV line. Right before they were about to take her to x-ray, the nurse asked for a pain rating.

“It can’t still be a 9,” the nurse insisted. There was no possible way on earth the morphine wouldn’t touch her pain. The doctor popped in the room for two seconds to confirm that fact. They wouldn’t even consider giving her more morphine.

As they were about to wheel my daughter to x-ray on her gurney, the nurse asked her to wiggle her toes one more time.

The nurse squeezed my daughter’s toes. “Can you feel that?”

The nurse poked my daughter’s feet, ankles and calf muscles.

The answer was still a “no.”

As a mom, I panicked, trying to keep it inside, trying not to show my fear to my daughter. I looked to the nurse for help, waiting for her to call the doctor in immediately. Instead she sighed and rolled her eyes like she didn’t believe my daughter. Then left the room (in no big hurry) to find the doctor.

“She said she can’t move her feet now,” she said to the doctor as they neared the room. If cynicism were syrup, it would have dripped from her mouth.

The doctor was no less cynical when he walked into the room. “Well you could move them a few minutes ago,” he groused at her.

Like the nurse, he poked and prodded her feet, toes, and ankles, all of which my daughter said she couldn’t feel. Still, there was no sense of urgency, no indication the doctor thought this was a serious spinal cord injury. It seemed more like a burden, an inconvenience. Clearly a teenager who was just attention seeking, exaggerating her symptoms to get attention and possibly narcotics. Never mind that she had no history of any substance use or abuse.

The doctor unwrapped a hypodermic needle and began to poke the bottoms of my daughter’s feet. When he got no response, he stabbed her feet with the needle, deeper and deeper until blood dripped from her feet onto the floor. Finally, one very deep stab elicited a slight “Ow” from my daughter.

“You felt that one, didn’t you,” he said in a smug voice. He then grabbed the tool to test my daughter’s reflexes on her feet. Nothing. He tested her reflexes again. Nothing. Then, like he couldn’t believe his own test, that my daughter could somehow fake reflexes that are impossible to fake, he tested again and again and again. At least 10 times on each foot.

Then he hurried. He and the nurse rushed from the room, the words consult, trauma surgeon and neurosurgeon trailed from their mouths, their echoing remnants just loud enough to hear. Suddenly a simple x-ray turned into a CT scan. A CT scan that showed several fractured vertebrae, but those fractures weren’t the worst. One vertebra had exploded on impact and bone fragments everywhere along her spinal cord. The trauma surgeon and pediatric neurosurgeon would be there within minutes to talk to us.

It was like I’d gotten a brand new ER doctor. He was no longer irritable and rude to my daughter. He talked to her like she was his own child, telling her the surgeon would take care of her. “Your pain must be excruciating,” he said. “There’s no way we can make it all go away, but I can give you more morphine to take more of the edge off. We’ll try to keep you as comfortable as possible.”

Through the next round of x-rays and MRIs and bloodcurdling screams of pain every time my daughter was moved, the new and improved ER doctor and nurse were kind and compassionate.

Their behavior, their bias against mental health patients completely caught me off guard, like getting t-boned by a car you never saw coming. My daughter was brought into the ER with a back injury, but she wasn’t treated like a person with a back injury. She was treated like a mental health patient who was exaggerating and lying just to get attention.

Someone might argue that I’m hypersensitive to the issue. Maybe in some circumstances I am, but experiencing bias from health care professionals was the last thing I expected, so I wasn’t looking for it. It wasn’t even on my radar.

I’ve called the paramedics’ supervisor and requested that they get some sensitivity training, I also asked the supervisor to tell them just how serious my daughter’s injuries were. I still need to talk to the ER supervisor.

There is a flip side to this. Not all health care workers have these biases. Everyone else we encountered at the hospital was simply amazing and my daughter received outstanding care. The pediatric neurosurgeon was a gifted surgeon and a wonderful human being. Every nurse and doctor in the pediatric ICU treated my daughter with the care and dignity she deserved.

Do I want that ER doctor and nurse punished for their bias and their terrible lack of judgement? Sometimes the thought crosses my mind, but I’m not a vindictive person. One of my goals as I walk beside my daughter, is to educate people about mental illness and to get rid of the stigma attached to it. So what I really want is for that nurse and doctor to learn from the faulty assumptions they made. That would make me happier than having them fired.

I’ve learned that mental health stigma is everywhere, even in the places you’d least expect it. I continue to march forward in my mission to educate people about mental health and to erase the stigma surrounding it. 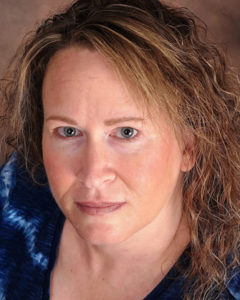 Beth Burgmeyer is a former mental health therapist who is now a writer and editor. Her experience with her daughter has made her want to help erase the stigma attached to mental illness. She lives near Des Moines, Iowa with her family and a menagerie of rescue animals.

To check out all of Beth’s guest posts on MHT, click here.

Leave a Reply to Caroline M. ×