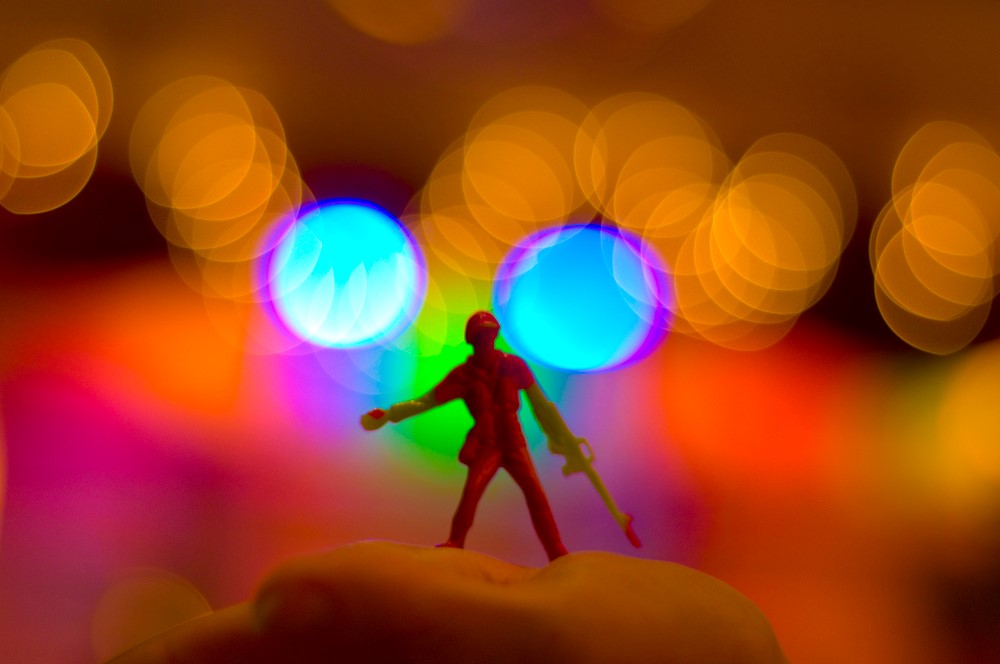 I am Russ and I have 3 children: 2 boys, 12 and 13, and a girl of 3. I’m in Cheshire in the UK and have been getting help for my mental health issues for about 6 months.  I have been on a massive journey in that time but that journey started 18 years ago when I joined the military.

I served in the British Army for 11 years and was deployed on operational tours to Bosnia, Iraq and Sierra Leone. I joined at 17 and was an average solider; I was well liked and enjoyed the life. Seven years ago I decided it was not for me anymore and left the military to get back to “real life”.

After leaving the military slowly, and without noticing, I cut off from most of my social connections. I lost sight of who I was and focused on work. I had a full time job and decided to start a small business at the same time.  I was working a 70 hour week and not looking after myself at all. I was eating junk food and not sleeping.  My deterioration took about 2 years to the point I spoke to no one from my time in the military, including civilian friends who I had known since childhood.

It was a very awkward moment and one of my lowest points when one morning, years after I left, I suddenly realised I was no longer in the military.  I felt like I did not fit in anywhere. I was not in the forces anymore but felt that civilians were a waste of space and this lead to some self-hate as I was now a civilian.

Most of my mental health issues relate to my inability to readjust to civilian life and even now, 7 years later, I am struggling with this.

Three years ago my daughter was born and this was an emotional roller coaster.  I was so happy to be a new dad and scared at the same time. This was made almost unbearable by the fact that Freya was born very prematurely at 28 weeks.  This took the last of my focus off me (and rightly so) as I needed to focus on Freya during the first couple of years.

I did not really notice my own continuing downward spiral and I never let it show in front of anyone.  But while on my own I would sob like a child and shake in knowing I did not have an identity anymore. This was a secret and, apart from on a few occasions, it never spilled into my life.

I was a youth worker and worked with young people at risk for criminal behaviour. I worked with them on a 1-1 basis and over time, I became less empathetic and less sympathetic to their stories. This was a fault in me, not them. I could only see the world in its extremes. The world to them was a very different place; what they were going through at home and in there social live was difficult but I could just not see it.

One day after a session and once the young people had left, I was overcome with anger at the opportunities that the young people were letting slip by. I wept for about 3 days and I was unable to go to work. I went to the doctor and faked an upset stomach to get a sick note (I did not realise I was faking it at the time) as I could not face work.

I was also unable to see all of this as a mental health issue.

After a couple of months of on-and-off illness and in-and-out of work from sickness, I finally broke down in the doctor’s office and was referred to a mental health team.

I started to feel better almost straight away as I had taken the first step which was admitting I had a problem. I was initially interviewed over the phone and then passed onto a veteran’s mental health team.

To start with the work was around “sleep hygiene” and making sure that when I went to bed, I was sleeping.  This for me meant going to bed later.  But when I went to bed I slept and it was better for me to plan 4 hours of sleep than toss and turn for 8. This had a big impact and was a major step towards self-awareness. It was only when I started sleeping I realised how tired I had been.

During sessions I started to learn about mindfulness and how to look at myself. The next few weeks were very eye-opening for me. I could see how I was affected by my issues and how I had become a shadow of who I was.  We looked at things from my past and we looked at things that could help me, like grounding techniques. We created a safe place and worked on mindfulness.

Mindfulness has helped me more than anything else. I realise it is not for everyone but it works for me. I am working on it constantly and try to live in an almost constant mindful state. It is only by doing this that I can monitor my mood and the way it is affecting my subconscious. Mindfulness and being more self-aware are now very important in my life. It gives me balance in everything I do and control over my mood and energy levels. It is not something I could tell you how to achieve. If you get the chance to learn about it, I strongly recommend it.

The next chapter started via planning to do things for myself.  I had not really done this for about 5 years. The first thing was to make a coffee and watch an episode of the Big Bang Theory. This was amazing and a much larger step than it seems. From there my planning went from strength to strength. I joined a gym and planned a walking route through the woods and meadows to give me time to reflect. I cannot stress enough the impact of personal reflection.

Then out-of-the-blue a friend asked me to play hockey (field hockey).  Hockey was a game that had been a large part of my life for 16 years (until I had quit 5 years previous). I turned up and played my first game and enjoyed it. The improvement in my mood was almost instant; my partner even mentioned it.  I don’t know if it was the exercise or the social side but I felt like the world had just faded back into colour.

I signed up for the club the following week and have played the full season. It has made a massive difference for me socially.  With everyone I meet we have something in common to start a conversation. It was also my time to be myself; it was space to work out who I was. It was difficult in the beginning because I was outgoing and loud at the club house and came home that way.  It was quite a shock to the kids who for the last 7 years have only really known me as a quiet introvert.

I have managed to start to balance this through the season so I am becoming the person I want to be little by little. I am far more capable to let my guard down and am enjoying people’s company again.

It is far from easy to stop the negative thoughts and self-loathing from coming back.  I practice mindfulness every day in everything I do. I know when my mood is dropping and get to the gym or go for a walk. There is only 1 hockey game left this season and I am anxious about the summer break, but there are a few tours and a summer league on a Thursday night so I am hoping I will manage to maintain my current state.

I am far more self-aware now and I feel small changes in my mood and physical condition. I know when I am tired. I know when I need time by myself (this is getting less and less). I know when I need and want to be around people. I have put life into perspective in so many ways that my working practice has improved significantly and I have discovered unconditional positive regard for the first time in my life.  I write a reflective diary and have recently started a blog; they are both really for me but the blog is stuff I am prepared to share. I hope as time goes on I will be happy to share more and more and will stop writing in my diary.

If you are suffering and want some advice, my advice would be to take it 1 step at a time, in your own time. None of us know what tomorrow will bring. If you have not yet admitted you have a problem or are too scared to admit it publicly then when you do, it is important that you own it and don’t let it own you. If you can be honest with yourself it is much easier to own it and take control.  If you ask for help I hope you have the same positive experience as I have had.

Through my journey so far I have become a little more selfish, more positive, less judging, more energetic, more thoughtful and more organised. I still have a long way to go but I am getting there slowly.

Russ is a youth worker, ex-solider and free thinker. To learn more about Russ, visit his blog.