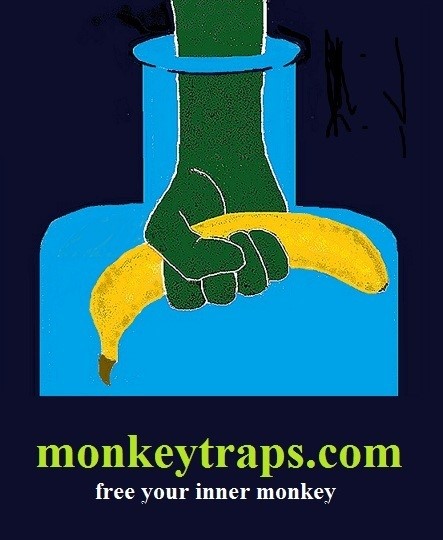 Thanks. What’s a monkey trap?

That description is hard on monkeys, but you get the idea.  Other versions use heavy bottles or anchored coconuts to hold the banana.

And this is what you ’blog about? Catching monkeys?

No. It’s a metaphor.

Psychological traps. The sort we all get stuck in.

A monkeytrap is any situation that pulls you into holding on when you really need to let go. I know I’m in one whenever I find myself trying to control something that can’t or shouldn’t be controlled.

Well, feelings are monkeytraps. So are relationships. So are stressful situations of all sorts. Anything that scares us or confuses us or makes us uncomfortable.

Come to think of it, life itself is pretty much one monkeytrap after another.

And you write about this because…

I’m a shrink. Twenty years of doing therapy have convinced me that just about every emotional problem is rooted in some sort of monkeytrap.

Anxiety, depression, addictions, relationship problems, parenting problems — all of them usually turn out to be caused by someone holding onto something when they really should let go.

Too much control makes us sick?

No. Too much controlling. Control itself, that’s usually an illusion.

I beg your pardon?

But think about it. What in your life can you finally, absolutely control?

Exactly. We spend our lives grabbing for it anyway.

Control is like a mirage that vanishes when you walk up to it, or a train you chase but never catch. Most of the time we don’t even know we’re chasing it.

“Ideas we have, but don’t know we have, have us,” James Hillman said.

Control is just such an idea.

We’re all addicted to control.  I know I am.

How can you tell?

Because the opposite of control is the ability to accept the reality you’ve got instead of trying to replace it with the one you want. (The reality you want, that’s the banana.) It means being able to relax, and do nothing, and trust that everything will work out okay.

I’m not able to do that much. You?

No one I know.

We’re the monkeys who simply must control things, or die trying.

It’s one of the reasons I avoid the term ”control freak.” There’s nothing freakish about controlling. What’s freakish is being able to stop.

I blame it on our big brains. Or what the Buddhists call monkey mind.

We’re so busy remembering and anticipating and analyzing and interpreting that we lose the ability to just be. To just breathe, and feel, and let life be what it is.

I have some ideas, too, about how to better understand and heal from this universal addiction.  I created Monkeytraps to road test those ideas.

Unpack them in public, ask readers to think about them and talk about them, to me and to each other. I’d like to start a conversation about all this.

Okay. Anything else I should know?

No.  Just come visit soon.  And bring your banana.

Steve Hauptman, LCSW is a Gestalt-flavored psychotherapist on Long Island, and the creator of the blogs Monkeytraps, Monkey House and Bert’s Therapy. He is also the author of a new book, Monkeytraps: Why everybody tries to control everything and how we can stop, currently being serialized at monkeytraps.com.

Steve has done a number of guest posts of MHT. You can read more from him here.