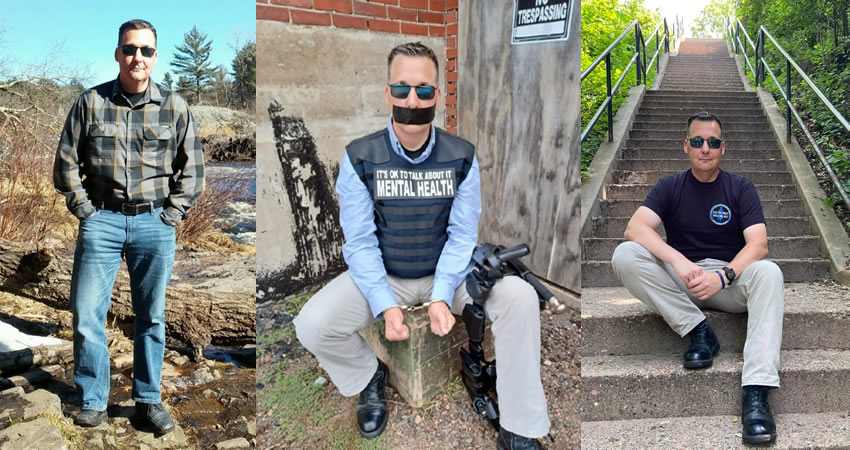 Written by Adam A. Meyers

My name is Adam A. Meyers and I was a Police Officer in Wisconsin for 21 years. On Friday, April 8, 2016, at 5:15 p.m., I was involved in a critical incident when I used deadly force against someone who armed themselves with a hatchet inside a busy department store. This person died. I faced many personal and professional mental health challenges after my critical incident. I have been diagnosed with a mental illness, and it has taken me many years to get back on track. I continue to struggle, but I am better than I was.

My poor coping strategies easily put my relationships, my job, and my health at risk, but I did not care.  I wanted to escape from what I was feeling. I wanted to numb my emotions, my thoughts, my body, and any memory of taking someone’s life. I wanted to feel better even if only momentarily. I was selfish, reckless, and I did not care how my self-destructive and dangerous behavior may affect other people. I did not even care how my behavior affected my family, friends, co-workers, or the public.

One of my many poor coping strategies was abusing alcohol. Prior to my critical incident I collected wine and enjoyed a glass of wine every now and then. However, after my critical incident I began abusing liquor, mainly whiskey and the cheapest vodka I could get my hands on. I would consume whiskey and vodka straight from their bottles, on the rocks, or I would create my own cocktails by combining over the counter liquid sleeping or liquid allergy medicines. There were times that I would mix in whatever leftover prescription medicines I had in the medicine cabinet, and it did not matter if they were prescribed to me or someone else.

For example, I remember one instance when my oldest daughter had leftover prescribed liquid cough medicine containing codeine. I combined whatever was remaining in the bottle with a glass of wine. I was on a prescribed anti-depressant called Venlafaxine while I was abusing alcohol. The label on this medication specially stated, “DO NOT DRINK ALCOHOLIC BEVERAGES WHILE TAKING THIS MEDICATION.” A warning label did not deter me from abusing alcohol. I very well could have blacked out and never woken up from consuming these dangerous cocktails, but at the time I did not care. I did not care and wanted an escape from my emotional pain. Abusing alcohol may have been a quick fix, but it caused me even more stress, anxiety, and depression.

There were many times I did not want to go to work.  This was not because I had other plans or that I was hungover from consuming too much alcohol, but I just wanted to stay at home and isolate myself from the world. I wanted to lock all the doors of my home, close all the curtains, and shut everyone out of my life. Sure, I called in sick from time to time, but on one occasion, I intentionally injured myself so that I did not have to work. I used an old 12-inch adjustable steel wrench to cause superficial injuries to my left knee. I struck my knee a dozen or more times, enough to cause redness, abrasions, and bruising, and limped into the local emergency room.  I explained to the doctor and nurses that I had tripped and fell down walking out of the back door of my house and struck my knee on the steel covering of an underground septic tank. My story was believable enough. I received x-rays of my knee, a prescription for pain medication, and crutches. I was discharged from the emergency room with a doctor’s letter releasing me from work for about one week. This occurred during a busy holiday work week.  Although I was not able to truly celebrate the holiday, this deception got me out of working and I was able to enjoy the time alone at home.

Another way I was able to get out of working was to intentionally make myself sick. I remember while taking a shower before my shift I was thinking about the many ways I could get out of working.  While I was putting on my ballistic vest, uniform, boots, and duty belt, I thought to myself, “I’m going to get out of working by binge eating and making myself vomit.” I constructed a plan to visit the local Burger King drive-thru while traveling to work. I ordered a bunch of breakfast food and made sure I washed it down with a large soda and a large orange juice.  I needed to make sure I added beverages to my breakfast buffet to ensure it would all come up easier when I made myself vomit.

I continued to travel to work after consuming a large amount of breakfast food from Burger King. I was about to pass the local McDonalds and thought to myself, “Two is better than one.”  I decided to travel through the McDonalds drive-thru and order even more breakfast food and beverages. I quickly binged what I purchased and proceeded to work.

I arrived at work and upon exiting my vehicle I played the role of the sick employee.  I walked into the police department and made myself vomit in the bathroom.  I made sure the bathroom door remained open so that anyone walking by could see or hear me.  I made sure that not all my vomit made it into the toilet and landed on the floor for an added effect.  I was immediately sent home.

Another way I dangerously coped was drinking and driving. Prior to attending any type of social event, even as simple as going to the grocery store, I would consume alcohol. I would travel to a nearby gas station and purchase many small bottles of liquor containing about 1.5 ounces of whiskey, vodka or whatever I could afford at the time. I would immediately consume the alcohol in my vehicle prior to travelling to my destination. I tossed the empty bottles in the back of my vehicle or out the window while I was driving. I would rationalize that it would take about 30 minutes for me to feel the effects of the alcohol and by the time I was impaired I would have arrived at my destination. I was very fortunate that I was not arrested for drinking and driving or even worse, killing someone.

I used casual sex as a coping strategy and to distract myself from my emotional discomfort and pain. I would meet women and sometimes within 30 minutes we would have sex. This caused me more stress and anxiety than anything else. Sure, I felt great during sex, but it caused me more harm than good. Although this type of sexual behavior was risky, self-destructive, and caused me stress and anxiety, it was not enough to convince me to stop. I wanted an instant feel-good escape from my life and casual sex provided that for me.

Another dangerous and unexplained way I coped was putting my duty weapon to my head. My duty weapon during my critical incident was a Glock 22 Gen 4 – 40 Caliber. I put my duty weapon to my head at least a dozen times. Sometimes I even placed the barrel in my mouth. I would always remove the magazine, but for those of you who are not familiar with a Glock, if you don’t rack the slide and remove the round from the chamber (barrel) it will still discharge a round. I very easily could have accidentally killed myself. My rationalization was that I simply wanted to hear and feel the metallic click of the trigger being pulled while the barrel of the gun was resting against my right temple. I did this while I was under the influence of alcohol. I still do not truly understand why I did this and sometimes wonder how many times it happened while I was blacked out from excessively consuming alcohol. I am very fortunate to be alive.

I suffered in silence for many years after my critical incident and I am ashamed for the ways I poorly coped.  I find it hard to believe that nobody realized or even had a gut feeling that I was not doing well. I could not have been that good at hiding my poor coping strategies, or was I?  I have always wondered if people were slowly watching me self-destruct because they did not know what to say to me, how to help me, or they simply did not want to get involved.

Adam A. Meyers was a Wisconsin Police Officer for 21 years. Adam began his law enforcement career in 2001 after being an active duty United States Army Military Policeman. Adam was a Detective, a Field Training Officer and an Instructor in Firearms, Professional Communications, Vehicle Contacts, Scenario, and Officer Wellness. Prior to and during Adam’s law enforcement career, he has spent about 10 years working with Behavioral Health Services in Southeastern and Northwestern Wisconsin and for hospitals with Behavioral Health Units. As a Mental Health Advocate, Adam takes every opportunity to speak about his personal and professional challenges with mental health after his 2016 on-duty deadly shooting.