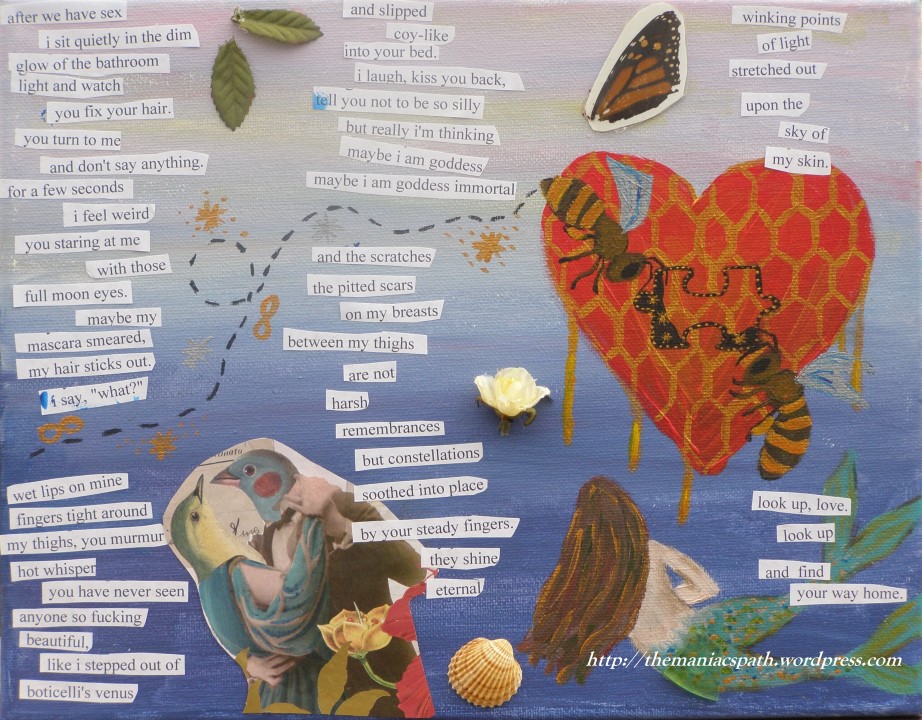 I view the journey I’ve been on through the lens of Persephone or Inanna’s myth – the story of a young girl who descends into the darkest corners of the underworld to confront her most vicious, unrelenting demons and emerges from that hell changed, resurrected, and a woman in every sense of the word.

My descent started in high school. Like many young girls, I began to worry about my appearance. It wasn’t vanity – it was an obsession. It got to the point where it took me three hours to get dressed. I would wake up at 4 AM to do my hair and tear my closet apart looking for clothes that never satisfied me. I became very depressed. My father, a family physician, started prescribing me anti-depressants at 14.

I didn’t think taking pills was strange at the time. Several members of my family suffer from bi-polar disorder or anxiety, so I had grown up hearing the names of the latest SSRI’s and anti-psychotics being passed around the dinner table like salt and pepper. It was just life; at a certain age, people became sad and needed to take medicine for it.

My first memory of picking is very clear: my mother was driving my sister and me home from the airport. We had just been on a month-long trip to Spain and Portugal, touring with the youth orchestra in which we played violin. I dug my nails into the seat as the urge swept over my body like a tidal wave. My mother pulled the car into the driveway. I didn’t even grab my luggage. I ran into the house and locked the bathroom door. Picking felt so unbelievably satisfying, like a high. I couldn’t stop it – I didn’t want to stop it.

Around that time, I started a romance with a boy I had met on the trip. It was a very confusing time. I admired him greatly, and loved him in the way only a naive fifteen-year-old girl possibly could. I very much wanted to impress him, but all I could do, hour after midnight hour, was mutilate the skin on my face. Once, he kissed me and my make-up rubbed off. He tilted my face up to his and I could feel his eyes scanning the marks, the dried wounds. I thought, “God, I want to melt into the earth. I want to be invisible.”

The skin picking became steadily worse. I would fake being sick and stay home from school whenever my make-up couldn’t cover the picked areas. Once, I didn’t leave the house for a week. Finally, enough was enough and I Googled my symptoms and told my father about my ‘bad habit.’ He diagnosed me with BDD and ADHD, and the pills just started coming. My father was so sure that if he found the right cocktail of drugs, I would be cured. The regimen changed every few months, sometimes every few weeks. He explained that my brain was more sensitive than others, and in some ways more hyperactive. “It’s just chemistry,” he’d tell me, and I knew that those words were supposed to reassure me.

But our brains and our bodies are not separate entities. Whatever happens to one, inevitably has an effect on the other. My body was in full revolt. I gained weight, I couldn’t stop shaking. At one point, my breasts started lactating – all side effects of the medication.

I was in a lot of emotional pain as well. It wasn’t just the skin picking that set me apart from my peers. I was socially awkward and had trouble communicating thoughts or feelings without the assistance of a pen or computer keyboard. Busy places like airports, malls and even parties just made me freeze. The sensory stimulation was overwhelming. At the same time, no one took very kindly to my increased absences from school and other social events. A few friends turned, and even my mother grew fed up with my recluse behavior. So when the opportunity came to get away from it all, I did.

I met a man a few years older than me. He was in college, and to a girl of seventeen that seems awfully important. He was sweet in the beginning of our relationship – he brought me flowers, wrote me love letters, visited me every day. But soon things began to sour. He turned dark. He had his own demons – a father who was murdered, a violent and neglectful mother – and he took his anguish out on me. I was Persephone, and he was my Hades and we were there in the underworld together. He really wanted to keep me there, too. He bought me the clothes he wanted me to wear. He wouldn’t let me talk to any of my male friends, and hacked into my email account a number of times just to make sure I stayed faithful to him.

My libido was shot to death by the pills, and he hated that. He didn’t trust me, and figured that if I wasn’t getting any with him, I must be getting it with someone else. He’d insist on entering me dry and I learned to disassociate right away – get the hell out of my body and out of the room. I stopped picking at my face, but I was tearing apart my breasts and bikini line instead. I didn’t understand why my body couldn’t just give him what he wanted.

He walked in on me picking once. He just barged into the bathroom and grabbed me by the shoulders. My breasts were streaming blood. He shook me like a ragdoll. “What the fuck are you doing?” he yelled. He became increasingly violent – punching the wall, throwing objects. One time, we got high together and he didn’t listen when I said “no” to sex. I felt so weak and stupid – I just lay there and took it. We never spoke about it afterwards, and both of us pretended it never happened.

After I broke up with him, something in me completely snapped. To lose weight, I started to jog and eat healthier. Everyone complimented me and said I looked good. Their compliments were like a mini high, and soon I wanted more.

The picking decreased, but in its place I started jogging and working out on the elliptical obsessively. I made sure to never eat more than 500 to 600 calories, and I weighed myself 2 or 3 times a day. All the pent-up anger I had towards my body was being used to control it. I went out with these guys and drank beer, smoked pot and stayed up until 4 in the morning with them. I started sneaking brandy up to my room and drinking it alone on the weekdays. No one had a clue what was going on. People would say, “You’re so skinny!” It was sickening. They were congratulating me, and the effect was like a jolt of pleasurable electricity crawling up my spine. I think we’re brought up to believe that individuals with eating disorders are emaciated, skeletal. But those suffering from ED’s come in every shape and size.

I eventually met the man I am with today. I had never before experienced a love so encompassing or forgiving, but we had a lot of trust issues to work through. I didn’t want him to see me naked, bare, flawed or vulnerable – not like those other men did. But he really wanted to know me, every single hidden part. Together, we made it our shared goal to find healing for me without prescription medication. We found a great psychologist who specializes in treating individuals with anxiety and compulsive skin picking, and I started seeing an acupuncturist who taught me what healthy eating and exercise really is. Slowly, I began to work through the body image and self-hatred issues I’d kept locked inside for so long.

The skin picking, I’ve realized, was a blessing hidden beneath the guise of a crippling disorder. Without it, I’d have never learned what a fragile and sensitive soul I am, and I never would have learned to mother myself and take the time to be selfish. I have a lot more confidence in my decisions and beliefs, and I am very picky about the people I hang out with. At the slightest sign of manipulation or ill will, I let them go. I have a new lease on life, but it’s not the life I had before the skin picking started. It’s an entirely new journey and adventure. I wouldn’t trade my place with anyone’s for the world. 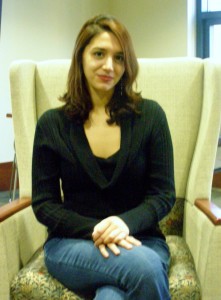 Veva is a writer, poet and artist whose work aims to render visible the shamanic spirit in modern culture and society. Her poetry has been published both in print and online. If she’s not writing (which is hardly ever), you can usually find her hunched in a corner with her nose in a thick volume of fairy tales.