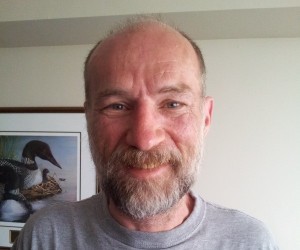 Written by Gary and Trish

I noticed a tall man in the small group that had gathered outside of the Krasman Centre that morning.  He was smoking a Colts and had a sense of calm about him.

I was playfully bickering with one of my friends when I noticed this tall man walk away from the group.

I told my friend “I am meeting Gary at 11am” and he pointed him out–Gary was the man walking away!  I was concerned he was leaving before I even had the chance to speak with him.

Instead he was being kind and putting his cigarette butt in a trash can on the next block.

We introduced ourselves and once the Krasman Centre opened, settled in the backroom where we would not be disturbed.

Then we started a conversation that would take place sporadically over a month, through face-to-face meetings and emails.

Gary identified himself as “poor”.  I asked him to define what poor meant to him.

“It’s more than about having no money” he replied.  “The poor don’t aspire to own things and destroy the earth.  They live by their hearts.  All through history, philosophers lived with the poor.”

During our conversations, it became clear to me that when Gary spoke of the poor, he was including people who experience mental illness found in areas of the poor.

When I asked him about his mental health, he told me he had never been diagnosed.

He later wrote of his “crazy” sister-in-law in an email to me.

“My sister in-law leaves water and a few treats out for the garbage men. Her neighbours think she is crazy.  But [if] she is crazy as a fox, these garbage men do special favors for her.  We forget that when we help others we receive a gift.  Kinship [is] not just serving the other but being one with the other is the greatest gift of all.”

The streets of Vancouver

Gary had volunteered with the Kettle Friendship Society for 15 years while living in Vancouver—a nonprofit organization providing mental health services and housing, run by people with lived experience.  He helped keep the place clean and talked with the visitors.

“It’s about being in kinship with them, knowing where their pain comes from and just being there.  The actual experience of things is where you learn.  There was a guy named Dave.  A big guy who was kind and gentle.  He had a big beautiful smile and when I looked into his eyes, I could tell he was seeing something.  When I asked him, he agreed.  Two weeks later he died.”

We talked about so many people living in fear.  I agreed; I believe it is a big contributor to the mental health issues that are so common today.

He commented on the difference between the level of fear in the people on the streets in Vancouver versus Toronto.

“The poor in Vancouver are not living in fear.  There is community and they help each other out.  The poor in Toronto feel so helpless—it is a totally different world.  Something has got to give.  The lack of caring becomes infectious.”

Back in Vancouver, Gary lived in a basement apartment and decided to turn it into a 24/7 drop-in centre. “They called it Gary’s school” he told me.  “Sometimes 20 people sleeping overnight.  You can give a bit of change [to the poor] and walk away but you have to live in kinship or it [negatively] affects your soul.”

“I have always been told to look at the larger picture; this will tell you what happens on the smaller scale of things.”

On the way out of the backroom toward the kitchen, Gary turned to me and said “Our civilization does not fair well with philosophers.  The tyrant-ogre may lose control.  I have seen the freedom of speech taken away, so many living in fear therefore not living.”

Gary offered to print me something he wanted me to read.  I waited at the kitchen table.  He handed me a piece of paper, grabbed a coffee from the coffee machine, and went outside for a cigarette.

I read it briefly, but decided to wait until later to slowly ponder the words in the quiet of my studio…

“Our society is not set up to cope very well with people who are “weaker” or “slower”.  More important, we are not skilled at listening to the wisdom of those whose life patterns are outside of the social norm.

There is a lack of synchronicity between our society and people with disabilities.  A society that honours only the powerful, the clever, and the winners necessarily belittles the weak.

Those who see the heart only as a place of weakness will be fearful of their own hearts.  For them, the heart is a place of pain and anguish, of chaos and transitory emotions.  So they reject those who live essentially by their hearts, who cannot develop the same intellectual and rational capacities as others. People with intellectual disabilities are excluded; it was never intended that they be included as equal partners with the powerful, with you and me.

Our notions of society and our belief systems flow from our own fundamental experiences of life, death, of joy, and of anguish.  If we have never experienced a love that is liberating, how can we talk of love as valuable?  If your journey through life has been one of conflict and power, then our image of the ideal person will be one who prevails in conflict and wields power with assurance.

The history of our world is the history of conflicts, of one group demonstrating its strength over another.  Weakness is at the heart of the need to belong; weakness that we may fear, because we have been hurt.  So we band together in groups in order to share our common strength.  So easily from this does conflict arise.

Each group is secure in certitudes and ideology.  From there it is a small step to indifference, to despisal, and to suspicion: the fear and hatred of others.”

A Canadian philosopher and humanitarian, Jean Vanier is the founder of an international federation of group homes for people with mental and physical disabilities.  He obviously understood the stigma towards mental illness and the root of it being fear.

I believe Gary was sharing Mr. Vanier’s philosophy as a way to further articulate the belief he had communicated to me earlier: there is a war on the poor.

Gary spoke of his experience of how a few people can control groups and how this related to the poor.

“We are controlled by the few.  [I] was at a Performance by the Soviet Red Army Song and Dance Festival in Toronto 1970’s; the best Russia had to offer.

The music program was about world peace.  Part way through the program a very small group stood up and started clapping.  Within a minute the whole crowd was on its feet clapping.  The music stopped, the band restarted, and kept trying to restart.

Thousands of people therefore missed the message because of a few, and the Russians must have gone away thinking what a bunch of barbarians.  Was this disruption by the few planned?  It may well have been by the location these few sat in the theater.

The poor are controlled in a thousand different ways, but they know what goes on in the world.  It is forced upon them.”

And according to Gary’s stories, what is forced upon them is as Jean Vanier said “fear and hatred”.

“You die from respiratory arrest, [a] chest compression does not supply oxygen to the blood stream” he told me.

According to Gary, rescue breathing is not taught because of the fear of contracting diseases from the poor.

In an email to me, Gary wrote of his latest battle.

“[I] had a meeting with four CPR instructors 2 months ago. They said this training is wrong and they would get it fixed.

[I] got a call from them a few days later “we have been told to shut up if we value our jobs.”

THERE IS A WAR ON THE POOR.”

He wrote further of what was going on in his neighbourhood.

“[I] was at a town hall meeting at South Regent Park a few months ago.  The residences wanted to stop a methadone clinic going into the neighbourhood; 200 white middle class home owners average age 50 years old.

The MPP comes to the podium and says he just talked with the developer and the clinic is not going in.  A loud cheer goes up; [the] end of [the] meeting.

I wanted to tell them that about 15 of them will wind up needing methadone.  They will get a bad back or cancer, need narcotics when they get well, their Doctor will tell them time to go on methadone to get off the narcotics.  People just don’t think; the poor wind up on narcotics for the most part because they are trying to cope with this mixed up civilization in the first place.”

Wisdom from the trenches

Gary shared his perspective on the state of affairs.

“All this wanting of material things the institutions preach[es] is what gets us into trouble.  The west lives off the back of the people in the third world.  Everyone’s subconscious knows this, but they disregard the outcome.”

He finished by saying “You cannot destroy the Earth and expect to gain wisdom.”

I don’t know if Gary meant “Earth” to only encompass Mother Nature.  However being that this philosopher whose wisdom is garnered through his life of living with the poor, including those with mental illness, I believe Gary’s definition of Earth also includes humanity.

What are your thoughts?

I would love to hear from you in the comments below.

What has been your experience/observations with the treatment and support of the inner city poor (including the mentally ill among them) where you live?