Growing up my life was far from easy. The daughter of a drug dealer and an addict, I was exposed to the worst of the world very early in life. My mother was more interested in the idea of a daughter than me specifically, making her more or less absent through most of my younger years. Instead my father would take the lead as the parental figure along with the girlfriends in his life. Although I recall many of these younger years as happy, there is a dark undertone looking back. The frequency of being left alone and unsupervised while sales or hook ups were going down, my basic knowledge of the birds and the bees and other adult concepts, and the fact that this was all before the age of 6, contributed to not the most healthy environment. At around age 6, things shifted after a police raid put an end to my father’s drug dealing days. Although he escaped jail, we ended up homeless. This set the scene for my mothers’ return in my life; she saw me as a bargaining chip to hurt my dad while receiving sympathy and support from her parents, my grandparents. The courts often sided with the mother so it was no surprise that even with her questionable character, they were granted joint custody with my mother as the primary. At this point I barely knew this person and had no knowledge of this side of the family at all, yet here I was. I spent the rest of my childhood between two homes, never fully feeling like I belonged in either.

My mother was the master of manipulation and kept me under her control for the next 10 years. Under her care I was frequently abused physically and emotionally. For these 10 years I became a pro at hiding bruises and making up lies. I learned to survive through the meticulous planning of escape routes and personal first aid. I protected the art of being as invisible and agreeable as possible. I lost myself in this process, but I stayed alive. The severity of my mother’s violence was always subject to the substances she was using. I was lucky in a way that she didn’t get back into drug use until I was a teenager or else, I don’t think I would have survived. While on drugs her behavior was more erratic, harder to predict, impossible to talk her down from. She didn’t worry as much about pulling her punches or hiding the bruises. It was this carelessness that when I was the age of 17, finally got the attention of Child Protective Services. I was removed from her home and sent to my father full time.

A Different Kind of Abuse

As you may recall, I mentioned the arrangement was joint custody which often made people wonder where my second family was while all of this was happening. The truth is that they knew; everyone knew. Early in the abuse, I was not shy or secretive, I asked for help, I screamed for it. However, as stated before my mother was the master of manipulation. She had most believing that I was the aggressor and the injuries on my body were out of my mother’s self-defense. I will never understand how people could look at that little freckled face 11-year-old girl and see her as violent, but they did. Those who didn’t believe her feared her in a way that prevented them from getting involved. The exception to this was my stepmother. It was her actions that made me realize I wasn’t living in one abusive home; I was living in two. Although she was aware of the abuse, she supported it. While my mom’s abuse of choice was physical my stepmoms was emotional. She would often reinforce the narrative that I deserved it and did everything she could to break the spirit I had left through emotional cruelty.

In my early adult years, the reality of my experiences caught up to me. I started having panic attacks and suicidal thoughts. Depression set in as I started to feel weak and vulnerable. I had survived so much and saw myself as a rock of emotional stability yet here I was on the floor hyperventilating because a sound scared me, I smelled something that reminded me of my childhood or simply because I felt overwhelmed by the decision of what to make for dinner. I needed help. I was lucky enough to find a therapist that I could connect with and who really understood trauma. I was diagnosed with Complex Post Traumatic Stress Disorder (CPTSD) and prescribed Cognitive Behavioral Therapy and an SSRI medication to help with anxiety. Slowly I started to get better.

My trauma will always be a part of my life but I found acceptance in it and disabled the control it had. I might always struggle with some residual effects like hypervigilance and the occasional bad dream or trigger, but it no longer rules me.

After growing up in an abusive home, I wanted to make sure nothing I went through was in vain. I started studying psychology and am currently working on my doctorate in Psychology (PsyD). Along the way, I have made the treatment and understanding of trauma my main passion and have devoted much of my time learning and working with those who, like me, have experienced it. Through this experience, I have been able to educate others and raise awareness of the issues trauma survivors face. My efforts in this area are ever growing as I hope to someday write a book about my experience and contribute my own research to the academic world. Until that day, I remain focused on my education and projects including my blog, my public speaking and life coaching business, Serene Life Consulting. I’m far from cured but I am happy. With a loving husband, supportive friends and two kitties to call my own, I have found a life that made surviving worth it. 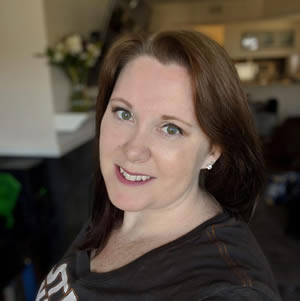 Hannah Siller is the owner of “Serene Life Consulting” which provides life coaching, public speaking services, as well as educational and inspirational blogs and publications. Hannah is also part of other metal health projects including cohosting the show Psi Streams on Twitch and YouTube. In her free time her life is devoted to furthering her education and being the best cat mom and wife she can be.