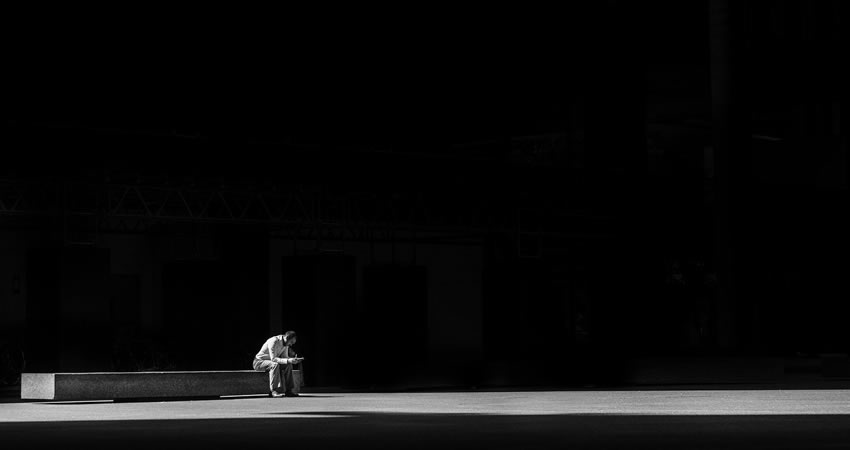 There is a crowd of people standing in lines, just to get their names registered under the tag “patients”. We aren’t people here anymore. Suddenly everything that makes us, becomes symptoms to be categorised under different labels. I am one of them. My father stands in line to get his daughter checked. We woke up at 4 am and got ready to reach the hospital so as to get our number fast. My father’s face is a broken wall where his eyes are stuck to see the world through a clouded lens of grief. My mother has dark circles under her eyes with the warrior suit of a woman draped over her body. She is a mother after all and mothers are not supposed to cry in front of their ill daughters. Shall I use the word “depressed” daughter? People look at each other trying to find the wrong through the way they walk, talk or even laugh. Laughter seems like voodoo here. People are scared to laugh in this facility of the hospital. Welcome to the mental unit named “psychiatry ward”. A psychiatry war.

The walls of this ward are pale blue in color and I nearly laugh at the irony that maybe the painter knew that grief is coloured blue. Blue, a shade of coldness running through the body, making the man shiver under the knowledge that he is alive. Isn’t it too heavy a realisation? Blue, a colour of life being drained out of warm faces. Blue, how death shines through. We are all huddled inside this hall where every name has a story to tell. A diagnosable story. A story with a prognosis and list of medicines to be taken together. I am looking around when I spot a young girl in her mid-twenties scribbling something in her diary. Perhaps, she’s just like Me; sees stories instead of walking figures. She is a poet maybe but here in this ward, it strikes as a peculiar thing to do. She is mad; that will be the final conclusion of anyone who sees her. We are all mad here. Just the degree of madness varies. Some are mad in grief while some are mad about grief. I am the later one. I don’t want to let go of my sadness.

Sadness which has stayed with me in times when nobody did. Sadness which gave me an identity when I was a no one walking through life. Sadness which made me a poet. This is not to say that art requires pain but my pain turned into poetry that day I was afraid to be a part of the similar crowd who was ill to various degrees. It was more of a reflex action than a survival instinct.

I see a woman in her mid-thirties, newly married, being brought in a wheelchair, her pupils barely visible in her eyes, screaming, to be free. I am scared seeing her. People in the hall are suddenly silent and make way for the girl and her family members to pass. In this silence lingers so many questions about our own fate. What if we were in her place? Would we be watched as if a mere spectacle? Would we be still accepted in this society which has normalised the normal so much that abnormal feels like a disease and an abuse?

I am waiting for my turn to come up. I keep looking here and there as my father talks to another grieving father whose son gets severe tremors in his body. His eyes are the shadows covering the earth on a solar eclipse. There are heavy dark circles under his eyes and irony sighs for what does god do when two grieving fathers talk about their suffering children. Does god just sip a chai and listens to them vent off or does he actually do something? Perhaps the answer lies in this statement, “god is a void”. And a void engulfs a person whole like an amoeba before spitting out the remnants of a human who lives just for the sake of it. This is not a TV show where we are the characters for people to laugh at.

This is not even poetry to convert them into metaphors when their pain goes deep within their soul. This is mere reality. A reality which outside this hospital ward, nobody will accept. A reality which can be so subtly ignored that all that remains is the silent cries in a closed bathroom and a look of hopelessness in their eyes. My father is standing still. Waiting for my turn as I prepare answers in my mind to questions like, “how do you feel now?” and “why are you sad when everything is fine?”. I hear a mother of a hyperactive child sob, saying her child wants to run in front of a speeding car. I hear a helpless father sitting by the side of his son, whose head is weighed down by the weight of his existence, just like mine. I stand up now.

My turn is going to come. I will be called any moment like in an award show with the only accolade is a name which sounds less like a patient and more like a story. I see a girl googling her symptoms and writing it down as “IBS” (irritable bowel syndrome). People are glancing at her, some wide eyes, some smirking. Didn’t I tell You, we all are “mad” here. Our body language is a symptom to be assessed. Our life, a case history written on various files. And our stories? Do they even matter besides being a test subject for practicing medical residents who want to be the best in their professor’s eyes? Who cares for us outside this ward? Perhaps Shakespeare was right in saying that this world was a stage but why didn’t he talk about the mentally ill being looked at as the only puppets whose strings were held by dependency on other people.

I am asked to take pills morning and night. SSRI is the category of this antidepressant. What does it do? Well it stops telling the brain that it is sad by raising serotonin. Which in other words mean that my sadness stays, I just stop feeling it. I am a patient on pills now. A patient suffering side effects like temporary happiness. What happens if I forget to take them? My brain realises too soon that it is sad and the world deserves to end and this pain deserves to go on, just not through me. People like us have no friends. We are never chosen over their busy time schedules. Didn’t I tell you we are no more people, but patients? Our identities are warped by the relatives who warn their kids to stay away from us or else this sadness will stick, converting them into a walking misery. Our friends separate like confetti blown away by the wind. And we… well we stay outside the cubicle of man deemed as god. But who saves us? The truth is nobody. We live like our stories, ending too soon, yet going on forever.

Hi, I am Bharti Bansal. I live inside the four walls of my mind. I beg for people to talk to me. I smile. I have a good smile. Maybe one day this smile will flatter people to not be afraid of me. Maybe one day I will be chosen. But today I am patient, for this life to pass as survivor.